During the decade 1990–2000, churches failed to gain members at the same rate that the total U.S. population grew. The proof can be found in The World Almanac. Because of reporting delays, the 1992 and 2002 editions approximately cover the last decade of the Christian “millennium.” One might have thought that churches would have been able to make gains on the strength of their constant assertions that the “end time” was near, but that did not occur.

The churches-listed in The World Almanac include most of the larger ones (many small denominations have fewer members than the Council for Secular Humanism). Small churches and those that failed to report new counts in the last ten years are not listed. For the purposes of this article, they have been divided into three groups by size: the fourteen biggest; the next eight; and the “also-rans” (based on 1992 figures).

A certain amount of splitting, merging, and renaming has occurred, so that, unless one follows such matters closely, it can be difficult to understand why a particular church suddenly gained or lost members. In numerous cases, there has also been exaggeration of member counts: church membership claims are not audited, but now and then some situation arises that throws some light onto such matters, as in the conviction of Henry Lyons, who had inflated the counts of the National Baptist Convention in a scheme to get higher prices for the denomination’s mailing lists.

Not everyone agrees with the Almanac figures. At least two poll-takers have reported that the numbers of Muslims are far lower than reported in both 1990 and 2000. The claimed Muslim population has gone up and down like a yo-yo over the last twenty years. In reality, there may be closer to one million than to 5.7 million Muslims. There have also been radical year-to-year changes in the Jewish counts. Quite a few churches only give round numbers, to the nearest million or half-million.

In sum, a large grain of salt is advised in considering these figures, and it is more productive to consider the big picture rather than the details.

As a group, the largest churches claimed 119,877,631 members in the 1992 Almanac; in the 2002 edition they claimed 128,617,363 members. The percent change was +7.3, which seems high until it is compared with the growth of the American population, which was 13 percent for the same decade. As a group, then, the leading churches lost market share.

The U.S. population is now about 285 million, so according to these unaudited claims, church members are about 54 percent of the population. Not all of those are Christians: there are also Muslims, Hindus, Jews, Buddhists, etc. It seems probable that less than half of Americans today belong to a Christian church. 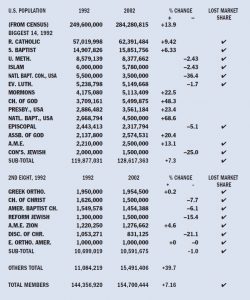 
During the decade 1990–2000, churches failed to gain members at the same rate that the total U.S. population grew. The proof can be found in The World Almanac. Because of reporting delays, the 1992 and 2002 editions approximately cover the last decade of the Christian “millennium.” One might have thought that churches would have been …

The Ethics of Humanism Without Religion

Why I Won’t Debate Creationists

Why I Did It

Thoughts for Today (and Tomorrow)

Ashcroft vs. The Constitution

How Reliable Are Our Moral Intuitions?