Re: “A Modest Proposal: Get Religion Out of the Charity Sector,” Tom Flynn, Free Inquiry, December 2017/January 2018. This memo is to assert that this proposal is not a good idea and that beyond being more unattainable than The Nine Demands, it is unlikely to energize the secular humanist movement. Furthermore, it is likely to be counterproductive. Why?

The religious community would surely want to know just what authority gives secularists the right to have anything to say about religious programs. Especially regarding charitable enterprises, is this not directly out of their playbook? A backlash would abound; headlines would proclaim, “Secularists Admonish Religion Not to Do Good unto Others.” Mr. Flynn states, late in his essay (fourth paragraph from the end), that realization of his goal would be a tremendous victory for secularism. Maybe. But certainly not a victory that will be easily obtained or sustained. Organized religion would not take this lying down. The old adage “choose your battles carefully” was never more relevant than in this case. There are more well-chosen goals for secularism at this time.

Although any civic restrictions on religious activity will likely be objected to by religious groups, those that are seen as societal equalizers are more likely to win the support of non-secular as well as secular citizens. My suggestions follow:

Religious beliefs, tenets, principles, etc., must give way to societal rules and regulations whenever activities are carried out in the public realm. This includes activities put forth by individuals as well as those of religious organizations.

Religious organizations should not be exempt from taxes on commercial ventures. This includes property taxes as well as income taxes on such endeavors. This suggestion needs considerable formulation by legal experts.

The land on which a religious edifice is built should be taxed, i.e., what would the property be taxed if it were simply an empty lot?

The above suggestions are more reasonable than attacking charity (yes, that’s how it will be viewed) because they address equalizing societal benefits and obligations for all. Why should whether someone believes in the supernatural or not determine how their financial endeavors are taxed? Freedom of religion is not compromised, and secularists are not meddling in religious affairs by these proposals.

Tom Flynn seems to have lost sight of the purpose of a charity, which is to provide help to those who need it. In my experience, recipients of a charity really don’t care whether the charity is run by a religious or a secular group. All they want is a meal and a bed for the night. There are many areas where secularists can battle sectarianism, but a hungry person will not thank you for adding charitable work to the list.

I hoped my “modest proposal” would elicit response, and I am not disappointed. To reader Ken McCaffrey, I concede that any effort to achieve the program I outlined would generate huge controversy. But so would the three “societal equalizer” steps that he recommends in their place. Imagine how passionately the religious community would resist any serious proposal to tax churches! As for the first of his suggestions, much religious Right activism has been aimed precisely at overcoming the idea that “Religious beliefs, tenets, principles, etc., must give way to societal rules and regulations whenever activities are carried out in the public realm.” Sadly, because of all this reactionary activism, that idea commanded far greater assent in the mid-twentieth century than it does today. Reader Dick Page’s comment assumes that at least some needy persons might go unserved if religious organizations pulled back from general social-service work. History suggests otherwise; as I’ve often written, in the early nineteenth century religious organizations throughout the West provided most education, most healthcare, and most poor relief. Today churches and related groups are minority providers in each of these domains. That doesn’t mean that the young went untutored or that the sick went untreated or that the poor went unaided compared to their lot circa 1818 or so. Instead it means that government and the secular private sector shouldered a much larger share of this effort, far outstripping what religious groups previously provided and greatly reducing society’s dependence on them. My proposal is controversial, yes; yet on another level it is simply a call for the roughly 200-year secularizing project of secular providers replacing religious providers of every kind of social service to be urged to its conclusion, sooner rather than later.

Sarah Haider (“Violence and Freethought,” FI, December 2017/January 2018) really knows what she is talking about. “You can kill a Nazi … by persuading the person to abandon that ideology.” Yes, this is what Christ was talking about when he said: “You must lose your life in order to gain your life.” John Hick defined spiritual transformation perfectly when he said that it is “the shift from self-centeredness to Reality-centeredness.”

Haider’s squashing of violence as a response to words that one is not able to refute used to be referred to as “Not letting someone get your goat.” The defense tactic here is sometimes defined as turning the other cheek, refusing to be baited into violence. George Washington had his own way of prescribing that strategy: “Always be courteous.” That makes it very difficult for anybody to “get” anything on you.

Fight for Our Philosophy

It is painful to watch your authors’ ongoing struggle to marry secular humanism to naturalism. The trouble is that it is humanism—not naturalism—that needs to be jettisoned. Humanism has never been compatible with a materialist view of the world because its moral code requires some source of free will that cannot be accounted for outside of a dualistic system.

Religious believers have always known this to be the case and used it as an argument for the immorality of nonbelievers. Paul Kurtz, who was unwavering in his support for skepticism, never found the courage to renounce humanism, and thus far, neither have his acolytes.

I call it an act of courage because I think the idea that atheists are bad, immoral people so permeates American society that it is internalized by atheists themselves. So they find it necessary to make a distinction between required. It happens regularly, does not require divine intervention, and even a camel can do it.

Go to the Red Sea, between Elath and Sharm el Sheikh, and stand about 200 feet from the edge of the water. This is an arid, barren place, and in the Mediterranean sun, the sand is too hot for bare feet. The air next to the sand is also hot, which lowers the index of the good atheists—the secular humanists—and all those other bad atheists you may have heard about. That’s not us!

I would love to see us become simply an institute of secularist freethinkers who accept that science says that morality evolved just as our other social traits did: because it gives a survival advantage. Then we could get down to the fundamental scientific question of just how the brain produces these wonderful sensations of consciousness and free will, not to mention religious beliefs.

In “The Corruption of Philosophy,” FI, December 2017/January 2018, Tom Flynn discusses a famous experiment by the Templeton Foundation to prove that prayer helps a patient to get better more quickly. The result was a resounding “no.” G. Fung and C. Fung, in “What Do Prayer Stud
ies Prove?,” Christianity Today, May 15, 2009, admit that much but then completely turn the argument around, with “God wants this” and “God does that.” If you have a good library handy, look the article up. It is truly funny.

Re: “The Corruption of Philosophy” by Tom Flynn and “I Question” by James Haught on the religious beliefs of scientists (FI, December 2017/January 2018), we should look at the surveys of the beliefs of scientists by psychologist James Leuba in 1914 and 1933 and the replication of his surveys in 1996 by Edward Larson and Larry Witham. 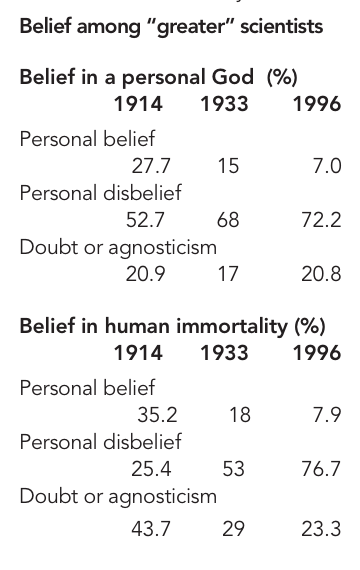 Sources:The Reformation of the Churches, by James Leuba (Beacon Press, 1950); “Leading Scientists Still Reject God,” by Edward Larson and Larry Witham (Nature, 23 July 1996). The percentages do not tally exactly, but that is how they appeared in Nature.

As a longtime subscriber/donor to National Geographic and Union of Concerned Scientists and one who has attended several lectures and viewed videos on the subject of global warming, it never ceases to amaze me that all these lecturers believe that we have to plan for X amount of population increase in Y years. The root cause of the problem is too many people consuming the planet’s resources and thereby trashing our environment. In short, overpopulation. Edd Doerr seems to be an uncommon “voice in the wilderness” who understands this. It’s fine to “go renewable” and cut back on fossil fuels, but we should be donating to organizations such as Population Connection that are trying to do something about the real problem. Thanks for your article in the latest Free Inquiry, Edd.

I always enjoy reading your fine magazine, and the December issue was the best yet. Congratulations.

Some of the articles mentioned the Christian myth of walking on water. I want to state, for the record, that no miracle is required. It happens regularly, does not require divine intervention, and even a camel can do it.

Go to the Red Sea, between Elath and Sharm el Sheikh, and stand about 200 feet from the edge of the water. This is an arid, barren place, and in the Mediterranean sun, the sand is too hot for bare feet. The air next to the sand is also hot, which lowers the index of refraction and creates the most intense, beautiful, and absolutely convincing mirage I have ever seen: the water’s edge appears to be about fifty feet away. Then a man walks by with his camel, near the real water’s edge where the sand is cooler. There he is, folks, walking on water, about 150 feet away from the (apparent) shoreline! Utterly realistic. I had to hold my breath. Doubtless a source of wonder in superstitious Biblical times and surely part of the local folklore that spread inland. Add that to the mix of wonders that emerged from the blender of credulity, fabrication, and devotion, and you have a great Biblical story with a perfectly natural explanation.


Re: “A Modest Proposal: Get Religion Out of the Charity Sector,” Tom Flynn, Free Inquiry, December 2017/January 2018. This memo is to assert that this proposal is not a good idea and that beyond being more unattainable than The Nine Demands, it is unlikely to energize the secular humanist movement. Furthermore, it is likely to …

See No Evil, Hear No Evil

It’s Time to Put the Myth Theory of Jesus Aside

My Escape to Freedom

The Illusion of Winning the War against ISIS