This year is the silver anniversary of the re-opening of the Robert Green Ingersoll Birthplace Museum by what is now known as the Council for Secular Humanism. (The birthplace of nineteenth-century agnostic orator Robert Green Ingersoll had been restored and opened as a museum twice before—in the 1920s and the 1950s—each time closing after a run of less than ten years.) It is a point of pride that the third restoration of Ingersoll’s birthplace has welcomed the public each year for a quarter-century (with no end in sight). Another point of pride is a regional spinoff project that went on to have a significant impact on cultural heritage tourism in west-central New York State: the Freethought Trail.

The idea for the Trail hatched in 2002 in a conversation between historian Sally Roesch Wagner, then in the early stages of preserving the Fayetteville, New York, home of freethinker and suffragist Matilda Joslyn Gage, and me. We knew that the Erie Canal’s central watershed, encompassing the cities of Rochester and Syracuse, was rich with freethought and other radical-reform history, much of it largely forgotten. How best to shine an overdue spotlight?

Our answer was the Freethought Trail, announced in 2003 and launched in 2005, aided by a grant from the James Hervey Johnson Charitable Educational Trust. In the beginning, the Trail was an informal collection of fewer than thirty sites significant to freethought, woman’s rights and suffrage, sex radicalism, and anarchism. Included were unmarked sites, sites with a historical marker, and full-blown museums. The Ingersoll Museum and Gage residence (now the Matilda Joslyn Gage Center) were on the trail; so was Mark Twain’s gravesite in Elmira, Margaret Sanger’s birthplace in Corning (now a Wegmans grocery superstore), and the sites of the tenements and sweatshops in Rochester where anarchist Emma Goldman was first radicalized. Full Trail information with a page for every site was provided online at www.freethought-trail.org (still the active address); summary information was provided in a foldout brochure displayed at tourist information booths along the New York State Thruway. Additional historic sites were added as research brought them to light.

A 2008 grant, again from the James Hervey Johnson Trust, made possible development of a significantly enhanced website, which debuted in 2009 and served the Trail well until early 2018.

When an ad hoc group of museum directors, local tourism officials, and tourist industry professionals sought to bring a regionwide focus to the promotion and enhancement of cultural-heritage tourism, they looked to the Freethought Trail as a model that burst through the traditionally pervasive siloing of tourism-promotion efforts in the region. Where cultural sites’ self-promotion tended to partner only with other sites sharing a specific historical interest or even a narrow location (such as a single Finger Lake), the Freethought Trail ran the gamut from antislavery to woman’s rights to freethought, and made a point of exploring the relations among them. Geographically it spanned the whole center of New York State without regard for city boundaries, the borders of traditionally defined tourism districts, and so on. The New York Cultural Heritage Tourism Network operated informally for several years. When it incorporated in January 2015, I had the honor of serving as one of its founding board members.

The pace of research quickened; coverage of west-central New York’s vivid abolitionist heritage was added, as was recognition of smaller but still-important social-change movements such as the Fourierist commune craze of the 1840s and the later dress reform movement. By 2017, the trail extended from Rochester on the west to Utica, New York, on the east, and included a record 112 sites. That number of historic locations overwhelmed the 2009 website; for example, a user who invoked the drop-down menu of towns and villages containing Trail sites would be confronted with a daunting list that stretched downward several screens’ worth. Fortunately, a generous 2017 grant by the Johnson Trust funded a complete redesign of the Trail website (along with yet another expansion of the Trail’s foldout brochure).

August’s Silver Anniversary Ingersoll conference, to be held in Syracuse, New York, on August 18–19, will bring freethinkers from across the country to west-central New York and give them a taste of the Freethought Trail. I hope at least some of them will plan to stay in the region a few days longer and explore the Trail in greater depth.

This is the only attraction on the Freethought Trail operated by a religious organization. It’s a quite professional museum operated by the Church of Jesus Christ of Latter-day Saints, interpreting the print shop where the first edition of the Book of Mormon was printed in 1830. We celebrate a different aspect of what happened on that site.

From 1829 to 1831, Abner Cole—who published as Obadiah Dogberry—ran a freethought paper based in Palmyra, New York. There was one printer in town; so when “Dogberry” worked on his paper overnights (the arrangement he had with the printer), for several weeks pages from the Book of Mormon were hanging all over the shop drying out. “Dogberry” took advantage of being the first person (other than Mormon prophet Joseph Smith and printer Egbert Grandin) to get an advance look at the new scripture. Not long before Joseph Smith planned to put the Book of Mormon on sale, “Dogberry” ran some 16,000 words of unauthorized excerpts and trenchant criticisms over several issues of his paper, the Palmyra Reflector. Many of his objections to the Book of Mormon still hold up today.

Gerrit Smith (1797–1874) was a free thinker but not quite a “freethinker.” He remained a Christian, albeit a radical one, throughout his life. But Smith exemplified the radical reform impulse and the astonishing cross-fertilization of causes and people that distinguishes the Freethought Trail.

Smith was pre–Civil War America’s foremost philanthropist and reformer. He became a seminal figure in the abolition movement, a major participant in the Underground Railroad, and a significant figure in the woman’s suffrage movement. In addition, he took a strong interest in the dress reform movement of the 1850s, which sought more practical and healthful clothing for women. His daughter, Elizabeth Smith Miller, designed dress reform’s signature garment: the Bloomer costume, consisting of Turkish-style pantaloons over a mid-length skirt.

Smith’s personal connections were as impressive as his activism. He was cousin to the future Elizabeth Cady Stanton, who met her future husband Henry Brewster Stanton at a social event at Smith’s mansion. His daughter Elizabeth (Smith Miller) lived across the town green from her father’s estate and became a suffragist and a philanthropist in her own right. 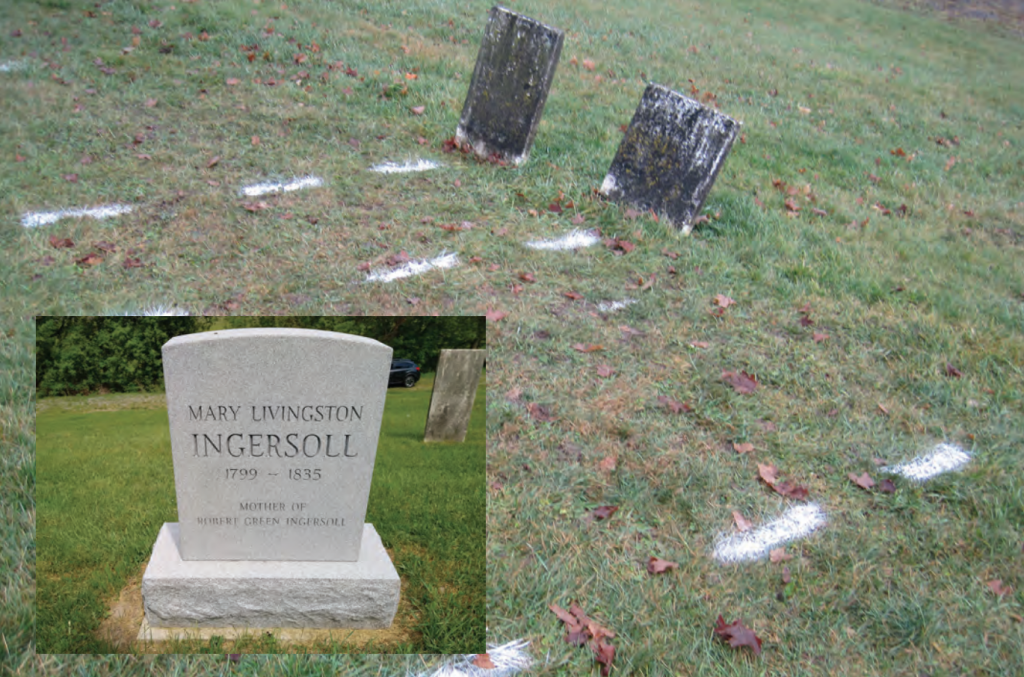 Robert Green Ingersoll, the future freethought orator, was three years old and living in Cazenovia, New York, when his mother died. His father, an abolitionist preacher, could not afford a burial plot; a fellow preacher of greater means donated a space in his family plot. Mary Livingston Ingersoll was buried without a marker. Soon, the Ingersoll family left Cazenovia. Her burial place remained unknown until 2014, when the Robert Green Ingersoll Memorial Committee reached out to local historians in Cazenovia in hope of solving the mystery. Examination of old records revealed that Luther Myrick, a prominent abolitionist, had donated the burial plot. The Myrick family plot was surveyed and examined using ground-penetrating radar. An “extra” body was discovered, not aligned with any of the site’s headstones: presumably, Ingersoll’s mother.

Funds were raised and a proper headstone was dedicated on Memorial Day 2016. Thanks are due to Cazenovia town historian Sara Chevako, Cazenovia highway superintendent and South Cemetery sexton Timothy Hunt, Cazenovia town clerk Connie Sunderman, and Mark Manzari of New York Leak Detection, which donated use of the radar equipment.

Of some three hundred communes founded (more or less) in the 1840s on the principles of eccentric French thinker Charles Fourier, only two were based on freethought. The Skaneateles Community, founded in 1843, was one of them. Its principal figure was John Anderson Collins, a picaresque character who had turned up in western New York that spring. Paid to organize an abolition meeting for Frederick Douglass, he delivered a harangue on the need for communal living and the abolition of private property instead. Douglass got him fired.

With nothing but time on his hands, Collins talked fast and persuaded some ninety reform-minded people to give up all they had and come live at the Skaneateles Community, built on the site of an abandoned Shaker commune. (A teenaged Matilda Joslyn—later the freethinker/suffragist Matilda Joslyn Gage—and her father, Hezekiah Joslyn, were almost among them, until the elder Joslyn grew suspicious of Collins’s methods.)

The commune opened in January 1844 with too few people and too little money. Critics savaged Collins’s ultra-radical “No-God, No-Government, No-Marriage, No-Money, No-Meat, No-Salt, No-Pepper” system. The reality was very nearly that bad. By February 1846, the community was failing. An area newspaper editorialized that “the bonds of infidelity are not suited to hold men together in social harmony.” In May 1846, Collins declared the project defunct and promptly disappeared.

The property is now a bed and breakfast; the main house (not shown) is little changed from its appearance in the 1840s.


This year is the silver anniversary of the re-opening of the Robert Green Ingersoll Birthplace Museum by what is now known as the Council for Secular Humanism. (The birthplace of nineteenth-century agnostic orator Robert Green Ingersoll had been restored and opened as a museum twice before—in the 1920s and the 1950s—each time closing after a …

Features of Religions as Cognitive By-Products

The Story of a Creature with Peculiar Habits

The Meaning and Legacy of Humanism: A Sharp Challenge from a Potential Ally

Tale of the Trail

A Trail for the Heartland

Women Should Be Mad at Religion Not (Just) Trump