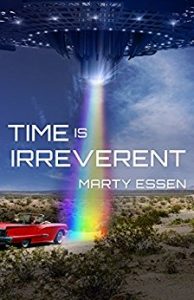 Time Is Irreverent is not really a science-fiction novel. It’s a novel that takes familiar science-fiction tropes and bangs them together like that mechanical monkey in Close Encounters of the Third Kind. From the clatter somehow emerges a delightful romp that scores solid satirical points about religion, human nature, sex, the Trump administration, and a great deal more. Along the way, it also manages to yield up one of the most harrowing global-warming apocalypses I’ve yet encountered—even in science-fiction titles that take themselves far more seriously than this one does.

Author Marty Essen might be called a mildly successful travel writer—he’s produced two adventure-travelogues with an eco-activist bent (maybe that’s why his global-warming apocalypse rings so true), one of which gave him quite a second career on the college-lecture circuit. It is thus of course a coincidence that the novel’s protagonist, Marty Mann (get it?), is “a mildly successful travel writer.” Hey, it says so right on the book’s back cover. As the story begins, Marty has just been abducted by aliens. Said aliens streaked to Earth because a dumb-as-a-bag-of-hammers U.S. president has started firing off nuclear weapons; the aliens propose to save humanity by using their mastery of time travel to send one lucky human back to change history. The stakes are high. Should history be changed successfully, the Inquisition, the global slave trade, global warming, and the United States itself will vanish as though they’d never been—because they won’t have. On the other hand, humanity won’t be erased in the global nuclear cataclysm that looms not far along the current timeline. Everything’s a trade-off.

By the way, the particular piece of history that needs changing to, um, make Earth great again happened in Galilee in 31 ce.

Like its title, the book is irreverent. Screamingly so. The jokes stream at the reader like water from a fire hose too closely watched. The biting social commentary hurtles likewise. One of the reasons I say Time Is Irreverent uses science-fiction tropes instead of being a genuine science-fiction novel is that events are sometimes too pat. Of course the alien visitors have unpronounceable names, and they’re amenable to Marty giving them new ones drawn from the Baby Boomer rock-star pantheon. Of course the aliens are sexually compatible with humans, and Essen wastes as few pages as possible before so demonstrating. Of course the first woman Marty meets when he’s accidentally shuttled to the year 2056, at which time America is dying, is impossibly beautiful, sexually repressed by a fundamentalist society, and … wait for it … lesbian. (Essen has wicked fun at the expense of the science-fiction cliché of boy and girl on the run fleeing from unspeakable horrors and falling in love.)

And of course Jesus Christ gets a cameo. To be honest, I’m kind of surprised Essen didn’t work in Stan Lee.

Serious literature it’s not, but Time Is Irreverent sends up faith and fundamentalism in refreshingly novel ways, offers some solid expressions of humanist ideals, and spins a rattling good yarn whose delights are in no way diminished by the novel’s flaws. How could it be otherwise, when author Essen stands metaphorically beside us wink-wink-nudge-nudging us as each bit of plot cheating tumbles by? Highly recommended, if you like this sort of thing.


Time Is Irreverent, by Marty Essen (Victor, Montana: Encante Press, 2018, ISBN 978-0-9778599-4-8) 238 pp., Softcover, $14.99.   Time Is Irreverent is not really a science-fiction novel. It’s a novel that takes familiar science-fiction tropes and bangs them together like that mechanical monkey in Close Encounters of the Third Kind. From the clatter somehow emerges …

The Humanist Case against Patriotism

The Age of Theism Is Over

Puzzlement Preferred: How to Use the Sweet Spot of Fear to Escape Religious Thought

Brett Kavanaugh, Critical Threat to Church/State Separation if Confirmed to the Supreme Court

Brett Kavanaugh and the Road Ahead

End of a Golden Era

The Signature of Freedom