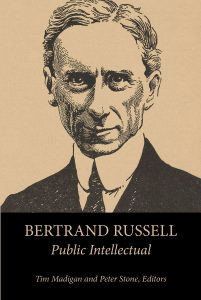 This appealing anthology profiles mathematician, philosopher, peace activist, sex radical, and humanist Bertrand Russell (1872–1970) through the lens of his status as a public intellectual. In the mid-twentieth century, Russell was perhaps a public intellectual par excellence; he was the only philosopher (and almost the only scholar) whom the general populace saw on television regularly, whether he was commenting on current affairs or getting arrested for his anti-war activism. This gave him much the same status vis-à-vis philosophy that Albert Einstein enjoyed vis-à-vis science at that time. The book’s coeditors, the philosophers Tim Madigan (a former executive director of what is now the Council for Secular Humanism and a former editor of Free Inquiry) and Peter Stone, have assembled a wide-ranging and highly accessible anthology whose ambit is actually considerably wider than its title would suggest. Bertrand Russell: Public Intellectual is actually a solid introduction to Russell, period. Peter Stone admits as much as the conclusion of his introduction to the book: “[The chapters to follow] will give you solid answers to the question—should you be reading Bertrand Russell?”

This is not to suggest that this broad focus is a defect in the book. In fact, one can scarcely do justice to Russell as a public intellectual without considering his whole life, at least in passing. Russell was the child of freethinking English gentry; his parents died when he was very young, and his upbringing was entrusted to a religiously conservative relative. (Obviously, the religion never stuck.) Early in his career, Russell excelled as a philosopher of mathematics. With his mentor Alfred North Whitehead, he wrote a towering work, Principia Mathematica (3 vols., 1901–1913), that endeavored to place a consistent logical foundation beneath the whole of mathematics; the Principia is still well-regarded today, even though Kurt Gödel demonstrated in 1931 that its quest was futile—the arithmetic of natural numbers is foundationally logically incomplete.

Russell and his then-wife Dora launched one of Britain’s foremost experimental schools; it was in part the need to generate funds for the short-lived school that first prompted Russell to broaden his philosophical horizons and begin to write and lecture broadly. He opposed Britain’s entry into World War I so vociferously that he was jailed for it. He had radical ideas about sex and marriage, at least by the standards of the time, and he wrote about them eloquently. One critic savaged him as “lecherous, salacious, libidinous, lustful, venerous, erotomaniac, aphrodisiac, atheistic, irreverent, narrow minded, bigoted, and untruthful”; arguably, all but the last three were true. Controversy over Russell’s moral views led to a famous incident in which he was refused a faculty position at the City University of New York. To be sure, Russell enjoyed a vivid sex life: he had four wives and also had mistresses, including Lady Ottoline Morrell, with whom he produced a fascinating epistolary literature.

After World War II (which he generally supported), “Russell remained, at great cost, a public intellectual on issues of war and peace,” in the words of book contributor David Blitz. He was jailed again, at the age of eighty-nine, for his part in an anti-nuclear demonstration. He counseled JFK by telegraph during the Cuban Missile Crisis. He chaired an influential ad hoc tribunal investigating American war crimes in Vietnam. Along the way, he even helped give the world the peace sign, which began as the logo of a British nuclear-disarmament group Russell helmed.

Russell’s principal contribution to unbelief may be his 1927 book Why I Am Not a Christian, which stands alongside Thomas Paine’s The Age of Reason and, um, the Bible among books credited with leading large numbers of people away from faith during the twentieth century.

Russell is a fascinating figure who, despite his residual fame, deserves to be yet better known and yet more widely read today. If you’d care to learn more about one of the twentieth century’s most important thinker-activists and didn’t know where to start—well, now you do know where to start.