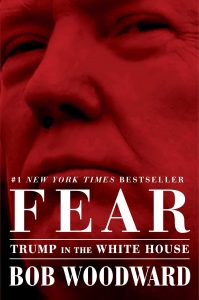 On September 5, The New York Times published an op-ed titled “I Am Part of the Resistance Inside the Trump Administration” by an unidentified, but known to the paper, “senior official” who stated that “I work for the president but like-minded colleagues and I have vowed to thwart parts of his agenda and his worst inclinations.” He or she, self-identified as a Republican conservative, states that Trump’s “impulses are generally anti-trade and anti-democratic,” that Trump’s “leadership is impetuous, adversarial, petty and ineffective” and “erratic.” The author adds that Trump “shows a preference for autocrats and dictators, such as … Putin … and Kim Jong-un, and displays little genuine appreciation for the ties that bind us to allied, like-minded nations.” He or she concludes that “we will do what we can to steer the administration in the right direction until—one way or another—it’s over.”

On the following day, the news broke that veteran reporter Bob Woodward’s new book Fear: Trump in the White House would be released on September 11. My copy arrived at our local library the next day, and this review was written on September 15.

This five-star book is neither a biography of Trump nor a comprehensive history of the 2016 campaign and the first year and a quarter of his administration. It is, rather, a brief report of his campaign followed by a painstaking but narrow examination of the Trump White House and administration’s dealings with foreign policy, trade, and the Mueller investigation. It is based on hundreds of hours of interviews, most of them tape-recorded, with “firsthand participants and witnesses to these events.” The interviews, Woodward writes, followed the “journalist ground rule of ‘deep background,’” that “all the information could be used but I would not say who provided it.” We learn a great deal about Steve Bannon and Reince Priebus and other current and former staffers, but what comes through loud and clear is that the Trump White House and administration are a toxic and dangerous stew of chaos, dysfunction, confusion, infighting, and incompetence.

Its narrow focus leaves out Trump’s views, intentions, and policies regarding religion, his evangelical voter base, his misogynist approach to abortion rights, and his antipathy toward public education and church-state separation.

What Woodward’s book, his nineteenth, confirms is what should be evident from the abundant media coverage in recent years: Trump has a short attention span; does not like to read; is woefully ignorant of foreign policy, economics, trade, and history; and is impulsive, forgetful, intolerant, vulgar, easily angered, infantile, untruthful, dangerous, unpredictable, and unhinged. No wonder some of his staff are staying around to try to minimize the damage he can do to our country, our democracy, and our environment. Missing is mention of some mental health experts referring to Trump as a “malignant narcissist.” Woodward gives the last word in the book to Trump’s counsel John Dowd, who resigned in March: “Trump had one overriding problem that Dowd knew but could not bring himself to say to the president: ‘You’re a f***ing liar.’”

In a television interview shortly after the book’s publication, Woodward was asked if he thought Trump was fit to be president. He replied that he had not expressed an opinion on the matter and that it was up to the voters to decide.