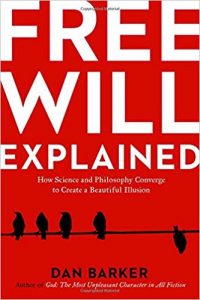 Former fundamentalist minister, lifelong musician, and longtime freethought activist Dan Barker seems to have found a new niche: reinterpreting the Four Horsemen for broader audiences. His 2016 God: The Most Unpleasant Character in All Fiction collected incriminating biblical passages to justify Richard Dawkins’s application of that unflattering label to God in his epic bestseller, The God Delusion. With Free Will Explained, Barker sets out to decode for nontechnical readers a nuanced position on free will much like the one Daniel C. Dennett expounds in books such as Elbow Room and Freedom Evolves.

Since Christopher Hitchens is no longer with us and, in any event, scarcely needs to be reconstrued for the general reader, I wonder whether Barker’s next work might be Sam Harris’s The End of Faith: The Musical.

Humor aside, Barker has set himself an immense task: communicating a position on free will equivalent to Dennett’s, if not explicitly Dennett’s, in a way that everyday readers can grasp intuitively. Those who’ve read Dennett on free will know that his position is hardly intuitive. It concedes that the natural world at human scale is solidly deterministic, then insists that free will is a useful illusion that gives us a sense of agency and roughly justifies commonsense ideas about personal responsibility. In his view, contra-causal free will—the idea that agents enjoy perfect freedom to make any choice they might wish—is illusory. Yet we can still have something close enough to free will (in Dennett’s memorable construction, “free will worth wanting”) so that we may still own our decisions in a meaningful moral sense. For Dennett, free will and determinism are not compatible but neither are they incompatible. Their relationship is more complex than that.

How would you express that in breezy, highly accessible prose? Barker reaches for analogies—lots of them, many based in music. He portrays deterministic cause-and-effect as horizontal—and likens it to melody—while he describes free will as vertical and more akin to harmony. He compares determinism to classical music performed in conformance to a written score and contrasts it with free will, to which he attributes the more improvisational character of jazz. He elucidates the concepts of “social truth” (the limited sense in which he posits free will to be true) by exploring why people still say “the sun rises” when everyone knows that impression is only an artifact of our planet’s rotation. There are many more such. What this approach lacks in rigor it makes up for—at least partially—in language that is simple yet often almost poetic. Barker concedes:

Free will, as traditionally understood, is a fiction.

The scientists are right. We can’t rise above nature to violate cause and effect.

… determinism and free will are not opponents facing each other across a board. They don’t inhabit the same logical level. We can’t ask if they are compatible. They are acompatible. … It’s like asking if a banana is compatible with forgiveness.

For now, think of it roughly like this: You are an animal whose behavior is determined by the laws of nature, but after you act, your mind retroactively loops around and judges that you were free.

Free will can be actually untrue but socially true. Free will is pronounced “true” by social agreement.

Predetermined or not, if you think your future choices are open, then having a sense of self-worth and wanting to preserve that feeling can lead to a better world.

Passages such as these can help readers who would never brave Dennett’s rich philosophical writing to form some useful sense of Dennett’s concepts. It’s a tour de force of popular interpretation. But is it convincing? That may depend on what ideas about free will one is already committed to.

Personally, I’ve always suspected that Dennett’s approach to the free will controversy cheats just a little—not that I’d relish being trapped in an elevator with him and trying to hash it out. At some point there is a waving of hands: free will and determinism are declared neither compatible nor incompatible, and at the end of the day, we get to keep essentially the same commonsense view of personal responsibility that we came in with. Somehow it seems too easy.

My own suspicion is that one day, when the psychology and neuroscience of human decision-making are better understood than they are at present, most of our traditional notions of guilt and responsibility are going to tumble into a cocked hat. I further suspect that we won’t be able to predict just how they’ll tumble until we have tomorrow’s science in hand. One of the less likely outcomes, in my view, is that guilt and responsibility will turn out to work just about the way we think they do today.

That’s how I lean, but at the same time I’m aware of the enduring character of tradition. Consider how much science has revealed over the past twenty years or so about the arbitrary nature of, first, human visual perception and, second, the storage and retrieval of memories—and yet eyewitness testimony remains admissible in courts of law. Police still challenge witnesses to pick perpetrators out of lineups! If one takes the science seriously, it seems almost inconceivable that the practice of criminal justice has changed as little as it has.

Barker writes, “No hard determinist will let criminals go free, saying, ‘They had no choice.’” That’s not quite true; in his 1924 defense of Leopold and Loeb, the freethinking attorney Clarence Darrow gave a twelve-hour summation arguing that based on what science then knew about human decision-making, our conventional notions of guilt and responsibility are obsolete and must be discarded post-haste in the name of justice. The radical nature of Darrow’s argument is sometimes underestimated because his goal was not to secure his clients’ acquittal (they had already pled guilty) but merely to spare them the death penalty. Nonetheless, if the logic of Darrow’s summation were generally applied, it might well result in the end of responsibility, the wholesale sunsetting of criminal-law concepts that many (Barker apparently among them) fear when they contemplate a thorough-going embrace of determinism.

Yet what if, when better science is ours, that is where it points?

The free will debate persists. It will persist at least until conclusive scientific evidence is in hand; the persistence of anachronisms such as eyewitness testimony suggests that the debate will continue a good bit longer than that. If Dan Barker’s Free Will Explained does not settle the controversy, it achieves another very difficult objective: digesting Dan Dennett’s nuanced position on the issue in a way that non-readers of philosophy can get their heads around.