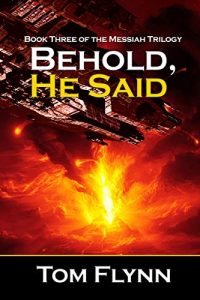 I hesitate to accord Tom Flynn’s deliriously erudite oeuvre the familiar label “cult books,” since cults are among the many human follies this witty and adroit novelist takes to task. In any event, the coterie of discerning fans who embraced Galactic Rapture (2000) and Nothing Sacred (2004) will be delighted to learn that the irrepressible trendrider Gram Enoda is finally back, along with 113 additional characters (some familiar, some not), plus the usual 42,000 human-inhabited planets that form the sprawling background of these cosmological comedies.

Early in Behold, He Said, we’re told of a Terran sage called Stanlee, a clue that prepares us for the Marvel-inflected central narrative, which is, of course—how could it be otherwise?—saving the galaxy. To dramatize this quête du millénaire, the author transports his readers into a zone of gloriously entangled plot threads. (Imagine a brigade of Theseus doppelgängers solving multiple labyrinths to track down a herd of Minotaurs.) The most amusing of these throughlines finds the human race experiencing the unexpected Milky Way–wide restoration of a certain kind of dualistic apparel essential to the bipedal lifestyle. We learn the details when Senator Pamela Grice discusses the phenomenon with Gram Enoda and an intelligent machine boasting moral personhood.

“As near as anyone can tell, and to the extent that the event times can be correlated across the Galactic lens, it happened everywhere at exactly the same moment.” Her face darkened as she made one more connection. “Sfelb, it happened to me. I got my sock back.”

“Still have it?” Computer asked.

“No, I threw it out—I’d trashed its orphaned mate shortly before it reappeared.”

“So that was your mission,” Enoda said incredulously. “High command wants us to—what, wonk how the socks came back?”

She nodded gravely. “Gram, the Confetory is hugely concerned about this. Imagine the implications for lint theory alone that such a thing even could happen … .”

As the novel unfolds, we learn much about the theory of lint: subatomic vibrating strings that “writhe energetically in all available dimensions.” (Flynn writes with his tongue so firmly embedded in his cheek that I fear his condition may ultimately require medical attention.) We’re also apprised of “dustbunnies,” elusive entities prone to taking universes displaying “stench symmetry” and linking them to their subatomic opposites, though the bunnies can be snared only by coaxing them out of their favorite hiding places, a type of black hole called a “sofa.” Unlike most other practitioners of satiric science fiction, such as Robert Sheckley, Frederick Pohl, Douglas Adams, and Kurt Vonnegut Jr., Flynn is committed to articulating his absurdist constructs in a disciplined, quasi-allegorical facsimile of actual scientific language. He does not settle for clinically depressed robots or chronosynclastic infundibula. Before wrapping it all up (and appending—good news—a cliffhanger), Flynn invokes a large subset of those radical innovations in physics, cosmology, mathematics, and philosophy most worth having conversations about, from string theory to the user illusion, chirality to lateral gene-exchange, Gödelian incompleteness to cybernetic teleology. Reading Behold, He Said is like perusing a kind of psychoactive spreadsheet whose entries consist not of data but ideas. This is Flash Gordon for intellectuals, and I applaud it.

Although Flynn gives us a full measure of fanciful settings and invented civilizations, I would argue that Behold, He Said achieves its charm not so much through world-building as word-building. On page after page, the author lavishes neologisms, bons mots, and other linguistic felicities on his readers. Sometimes the game takes the form of simple syllable substitutions, as when “ontology” becomes “offtology” and the Templeton Prize becomes the Temperdung Prize. (Free Inquiry readers will recall that Richard Dawkins once sardonically defined this award as “a very large sum of money” bestowed annually and reflexively on scientists who are “prepared to say something nice about religion.”) Deadpan puns abound. When a primitive poison dart–throwing weapon called a pfitt is fired at a tribal chieftain, the warrior Lubvit reports that the worst has happened: “The pfitt hit the Shan.” And the neologisms just keep on coming: bubbleprint, detex, experient, flashident, imposer, koscon, linties, pelfrag, punitorium, resonon, strel, transphotic, vibrion—116 in all. Readers will find themselves grateful for the glossary at the end of the book.

Eyeballing the pages of Behold, He Said, one quickly realizes that, as with Galactic Rapture and Nothing Sacred, the author relies heavily on dialogue to tell his story. While this technique is ostensibly a lackadaisical way to make prose fiction happen—a novel is not a play—I’m willing to give Flynn a pass, because the exchanges are so rollicking, as in this conversation between a Mormon mountebank and a member of his harem:

Alrue directed a fierce gaze up into the filth-streaked glasteel ceiling. “Deliver us your saints from that awful monster, our captivity!” he shouted. “Send forth also the power of Thine other mighty arm. Visit these walls with destruction!” He spread his arms. “O Heavenly Father, stretch forth yet one more mighty arm!”

Zuzenah, his eldest wife, stepped to the center of the circle. “No arms left,” she breathed.

“You’ve already asked God to bare one mighty arm, then stretch forth the second. Is that not all of them?”

Alrue frowned. “God is God. He can have as many arms as He wants. Now be quiet, woman. I’m supplicating.”

What I most admire about Behold, He Said is its manifest impatience with what the mathematician Jacob Bronowski called, in The Ascent of Man, our culture’s “loss of nerve” in the face of glib mystical discourse and “falsely profound” questions. Consider the case of Père Teilhard de Chardin, a scientist whom many thinkers—churchgoers and secularists alike—would credit with convening a unique and valuable theological-philosophical conversation. Although a cult of brainy “Omegists” appears on stage throughout Behold, He Said (beyond Teilhard, they all seem to have read Frank J. Tipler’s classic of crank teleology, The Physics of Immortality), Flynn is ultimately having none of it, and I expect he would agree with “The Phenomenon of Chardin,” the takedown of everyone’s favorite cleric-paleontologist that Peter Medawar published thirty-one years ago in The Art of the Soluble.

The Phenomenon of Man is anti-scientific in temper (scientists are shown up as shallow folk skating about on the surface of things), and, as if that were not recommendation enough, it was written by a scientist, a fact which seems to give it particular authority and weight. …

[His book] is written in an all but totally unintelligible style, and this is construed as prima facie evidence of profundity. It is because Teilhard has such wonderful deep thoughts that he’s so difficult to follow—really, it’s beyond my poor brain but doesn’t that just show how profound and important he must be?

Flynn also maintains his nerve before another troublesome set of supernaturalist teachings, the malevolent protocols of the Church of Jesus Christ of Latter-Day Saints (LDS). In recent years, four immensely talented writers for the theater have been drawn to the LDS phenomenon, and yet in the case of both Angels in America (1992) and The Book of Mormon (2011) the tone is closer to bemused appreciation than acerbic satire. Now, I’m fairly certain that if Tony Kushner had written his masterpiece after our republic learned, via the Proposition 8 debacle of 2008, just what a hideously homophobic institution the golden plates of Cumorah ushered into the world, he might have tweaked his text accordingly. As for Trey Parker, Robert Lopez, and Matt Stone’s hit musical, while it skewers some of the more notorious episodes in LDS history (one lyric mocks the Elders’ convenient 1978 revelation that black people are probably human beings after all), the show periodically goes mushy on Mormonism, a foible culminating in the mawkish final song, “Tomorrow Is a Latter Day.”

By contrast, consider this excerpt from an edgy exchange that Flynn constructs between Nataleah, an LDS wife of African aspect, and a journalist named Meryam Mayishimu. The harem member is the first to speak.

“… Mormonism was a religion of Terran whites. You’ve learned your Book of Mormon; remember Third Nephi 2:14–16? One small group of the evil, dark-skinned Lamanites had shifted their loyalty to the righteous, white-skinned Nephites, and what happened next?”

“‘And their curse was taken from them,’” Meryam quoted, “‘and their skin became white like unto the Nephites; And their young men and their daughters became exceedingly fair … ’ Forjeler, that’s still in there? I thought those old racist verses were removed long before the Galactic Encounter.”

“Only some of them,” Nataleah explained.

Science-fiction author Philip Klass (not to be confused with the late, great UFO skeptic Philip J. Klass), who wrote under the name William Tenn, once wryly defined his preferred genre as “the mass literature of the very few.” One could speculate that Tom Flynn’s novels, with their hearty page counts, bedrock contrarianism, and unflagging celebration of rarefied theories, will always remain a minority pleasure. And yet, as this loopy series itself reminds us, anything—within reason—is possible. Meanwhile, we few—we happy few, we band of blasphemy buffs—are free to revel in each new installment, imagining that their creator might have the last laugh.

Behold, He Said is also available in e-book form at a lower price.

Twice the winner of the World Fantasy Award, James Morrow is the author of satiric novels including Only Begotten Daughter (a sequel to the New Testament), Towing Jehovah (a Nietzschean sea saga of ideas), and Blameless in Abaddon (a modern-dress retelling of the Book of Job), all currently available in paperback editions from Harcourt.


Behold, He Said, by Tom Flynn (Double Dragon Publishing, 2018, ISBN 9781790470907) 778 pp., Hardcover, $27.99. I hesitate to accord Tom Flynn’s deliriously erudite oeuvre the familiar label “cult books,” since cults are among the many human follies this witty and adroit novelist takes to task. In any event, the coterie of discerning fans who …