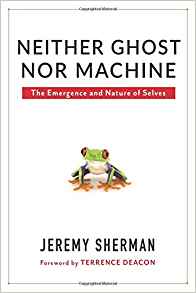 It was not what I expected but something better. In this book, psychologist Jeremy Sherman turns a light on the mystery of goal-oriented behavior in a mechanistic world. What is the source of purpose? How do aims arise from aimlessness? Can brute causes produce Selves with active intentions? This is not the classic question of the origin of private experience (qualia), what philosopher David Chalmers called the Hard Problem. In Sherman’s glossary, a Self can be as simple and insensate as a bacterium. Standing well outside the magic lantern of consciousness, he looks at bodily behavior only. But this lay-presentation of a model developed by neuroscientist Terrence Deacon (who provided the book’s foreword) answers more practical questions—the question of life’s origin and why goal-behavior can even exist.

Of course, our mechanical world includes many goal-focused processes, and not all are mysteries. Water seeks its own level, free markets tend toward price equilibrium, and refracted light “chooses” the path of least time (Fermat’s principle of light). The goal-like behavior that engages Sherman is autonomous self-regeneration and self-preservation, the kind that’s intractably difficult to explain in terms of raw billiard-ball causality, nudging us almost irrevocably toward the vocabulary of “want” and “seek,” what Aristotle called telos. Decades of research in artificial intelligence and protocell development have not yet convincingly reduced telos to causality. And while formal papers in the hard natural sciences eschew verbs such as want, try, and choose as a sort of bastard mysticism, softer sciences such as economics, sociology, and psychiatry just can’t get by without them.

Unfortunately, the book is a tough read and difficult to distill. Sherman’s proposal begins with the natural emergence of processes that conflict and constrain each other in a way that is mutually preserving and adaptive, “bootstrapping” against entropy. Imagine a mix of naturally occurring catalysts that self-copy, given a bath of suitable reactants, but also generate capsids, proteins that self-assemble into shells. Reasonably enough, some of those shells (dubbed autogens) might enclose the catalyst mix by lucky chance then go dormant. But later an autogen might break open, again in a bath of reactants, and the catalysts go back to work, producing more autogens. Bingo: a self-reproducing system, a kind of protocell.

It is not a selective system, though, not a purpose-driven one. Sherman then posits capsid shells that bond to the reactants, so the autogen becomes “stubbly” and more likely to break when reactants are present. This is a selective autogen. The next step involves natural sugar polymers (polysaccharides) that bond weakly to the catalysts, so that an autogen’s breaking would release them in an organized sequence. Now it is a template autogen, a system that not only self-copies but passes its unique characteristics to the next generation. It is the very germ of evolution.

Each stage is perfectly natural, perfectly mechanical, and leads to the seed of seeking: a system that moves toward goals or ends, with no ghost haunting the machine. It is a fascinating first answer to a mystery that has tickled philosophers for centuries.

The (minor) handicap is that Sherman is not the most lucid writer and tends to hammer his points with laborious repetition and stylistic affectations such as “for-ness,” “about-ness,” and “re-presents,” the latter to remind us that symbols are a sort of redundancy. Also, this first edition has a light dusting of typos—for example, the index misspells the name of my favorite modern cognitive philosopher, Douglas Hofstadter, though fortunately the main text gets it right. These are cavils. Neither Ghost nor Machine is a worthy read that bridges the chasm between chemistry and psychology and offers a fresh direction for research in abiogenesis.

Freethinker Ken Nahigian, a Bright, is a part of a Sacramento-based philosophical think tank consisting of him, four cats, and some shrubbery.