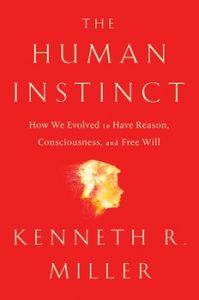 Although Kenneth Miller, a pro-evolution cell and molecular biologist, is within the modern liberal, science-friendly wing of Roman Catholics, in the end he is a creationist in the sense that he believes there really is a supernatural creator deity. As such Miller had been working to reconcile the speculative existence of the Catholic god with the natural origin of his special creation, Homo sapiens. In The Human Instinct, Miller focuses on the alleged presence of human free will, which unlike our having at least some reason and especially consciousness, is a matter of major dispute. In doing so, Miller does what theists frequently do: he compartmentalizes the subject in a way that makes the critical contradictions within the proposition that a good and fair creator exists less obvious. In particular, Miller is prone to claiming that he addresses deity-related subjects as a scientist rather than from a theological perspective, even though his arguments often have important theological implications that badly need addressing to assess the big picture.

I am not going to engage in a detailed discussion on the non/reality of free will. As interesting and ultimately important as the question is, my provisional opinion is that the data are not yet sufficient to answer the question. That said, if we do have free will, it is not all that much to write home about. We are all so tied up by assorted compulsions and addictions of genetic and experiential origin regarding desires, fears, and needs. It’s not much of a gift from a creator.

What I am going to focus on is why Miller’s not-out-in-the-open ultimate agenda shows that people have a real choice in what to do—from deciding on unhealthy bacon and sausage versus yogurt for breakfast to whether or not to accept the grace of Christ. This is not only defective because it is over-compartmentalized, it is a waste of time, because the state of the planet makes it impossible that any creator cares whether or not humans have freedom of choice.

Evolutionary creationist Miller wants us to accept as plausible that the creator relied upon Darwinian natural selection to create free will–possessing beings whose post-death souls are worthy of, and disposed to dwell in, its everlasting paradise. A critical problem is that even if bioevolution can generate big brains that have the freedom to choose, how the heck does a creator know what it’s going to get out of a free-wheeling, goalless system with no predetermined outcome? Miller agrees with the widely held conclusion that if most dinosaurs had not gone extinct sixty-six million years ago (primarily because of a random giant asteroid impact), it’s very unlikely we mammalian primates would be writing and reading about whether we have free will. What Miller does not come close to doing is explaining how evolutionary randomness is in accord with the Holy Trinity’s project to have clever creatures ardently petition a third of its divinity for its mercy.

It is true that evolution churns out lots and lots of convergent organisms, but during that same time it so far has come up with just one human-level intelligence. This is strong evidence that intellectualism is not one of the things that natural selection selects for on a common basis. Miller tries to get around the improbability of deity-worshipping apes being a low statistical probability by speculating that perhaps octopi could become smart enough to have free will. Is Miller serious? Dating back 300 million years in the fossil record, octopi have never shown indications of developing the sort of high intelligence that primates took a much shorter time to produce. Probably in part because the boneless cephalopods do not live in the terrestrial habitats that are likely best suited—if not critical—for the evolution of tool- and religion-inventing organisms. There is an air of theological desperation in this wild proposition.

Nor does Miller appreciate the scarcity of geological time for mindless evolution to fiddle around cooking up high-order intelligence without trying. With the sun getting hotter all the time, about 10 percent each billion years, the planet will not be able to avoid extreme global heating that will make what we’ll experience in coming centuries like sleeping through a New Orleans summer night without air conditioning—very bad but not outright lethal. The details are unclear, but in half a billion years or so solar heating will become so intense that the oceans will evaporate and even the poles will be so hot that only small heat-resistant creatures will survive. Seeing as how it took 4.5 billion years with a lot of statistical luck to unintentionally come up with human brains, to think that sans people, something else such as octopi could become similarly smart in the additional half billion years is a big stretch.

Miller makes it clear that he is concerned that if people think the human brain is a computer, they will not think that it is something special; it lacks a connection with the divine. He even cites C. S. Lewis on the topic. Yet he acknowledges—he has to, in view of the science-based side of his thesis—that brains are machines of a biological sort produced by natural evolution. There is nothing particularly divine about that either, so what is the point of the contradictory compartmentalized argument? Miller comes across as muddled and inconsistent, which is not surprising because he is trying to pound the obsolete square peg of faith-based supernaturalism into the round hole of what is our science-based natural world reality.

Now, about human free will and a creator of the universe caring about it. Although the compartmentalizing Miller does not go into it, free will has become of colossal importance to the thesis that we are the creation one way or another of a benign super deity, which is probably an important reason Miller has written a book defending the existence of human mental choice. That in turn is because there is a huge and obvious problem with the notion that we are the creation of a god that is anywhere close to perfect in its goodness. Namely, its project to put human souls into an eternal utopia has unfolded at the heavy price of tremendous suffering both for nonhumans (as I discussed in the June/July 2018 FI) and for people.

The leading theological effort to explain away this colossal mess contends that because the creator is a fair entity rather than an absolute dictator, it does not want the human souls that worship it forever in its perfect heaven to be automatons that did not choose to do so. There are patent yawning holes in this argument that I detailed in a 2009 article in Philosophy and Theology.

To be able to make an informed, intelligent, free will choice on their eternal fates—and thereby avoid being unfairly denied heaven via the grace of Christ through lack of opportunity to make said choice—every single human soul that is conceived must grow up to be a mentally healthy adult with solid knowledge of the message of Christ. Otherwise, one or more is going to unfairly be denied heaven, or if he or she ends up there without choosing the option, he or she will be stuck worshipping God forever whether he or she wants to or not. This would fiercely violate the absolute need for human free will.

The problem is that one way or another—whether it be Ken Ham’s special creation, Michael Behe’s intelligent-design creation, or Ken Miller’s evolutionary creation—any creator has out of callous and cruel criminal negligence or outright deliberation created a horrific planet infested with one deadly disease after another. Meanwhile, the creator not even bothered to equip children with adequate immune systems to defend themselves against their toxic habitat. On top of that, the human reproductive system is an inane Rube Goldberg scheme guaranteed to produce bad results most of the time.

As a result, of the 400 billion Homo sapiens conceptions to date, about three quarters have died before birth and half of the around 100 billion born have been ruthlessly tortured to death by childhood diseases. Also, Christianity did not show up until half of those were born, and since then most people have heard little or nothing about its scriptures. This has left a mere ten billion or so mentally capable humans who know about the word of an Abrahamic god. So there can be not the slightest doubt that any creator is a barbaric, immoral entity that is in no manner prolife or particularly concerned about human free will.

That being hard fact, Miller’s effort to demonstrate that evolution is compatible with a creator allowing free will to evolve in humans, even if correct as it may well be, is pointless when it comes to the faith-based speculation that that creator is a loving moral entity intent on making sure all humans have free and informed choice on having a pleasant afterlife. Not even close.

Miller makes no mention of this problem, nor has any theologian or scriptures. I know because I have done a literature search. (If anyone knows of a theodicy argument that explicitly discusses the mass death of nonadults, please send a letter to the editor.) Why do they ignore an issue of such enormous import? Obviously because there is no logical or decent way to explain how a good god could allow the horrific deaths of billions and billions of kids, which wrecks free will theodicy, so they don’t even try. Instead, merely mentioning the subject alerts the world to how a benign creator cannot exist. And in the end religion is propaganda. I sent a PDF of my Philosophy and Theology paper to Miller and other leading theologians and received nary a word in reply, including in the theological literature. Why? Because they have no answer.

Miller has debated fundamentalist and intelligent design creationists, but he has refused offers to engage with atheist critics of his efforts, saying he does not see a purpose in doing so. In other words, he does not see that it serves his agenda to do so. Readers of The Human Instinct may wish to keep that in mind.

Gregory S. Paul is an independent researcher, analyst, and author. His latest book is The Princeton Field Guide to Dinosaurs (Princeton University Press, 2010).


The Human Instinct, by Kenneth Miller (Simon and Schuster, 2017, ISBN 978-1476790268). 304 pp. Hardcover, $26.00. Although Kenneth Miller, a pro-evolution cell and molecular biologist, is within the modern liberal, science-friendly wing of Roman Catholics, in the end he is a creationist in the sense that he believes there really is a supernatural creator deity. …