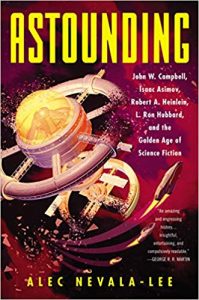 In November 1988, Isaac Asimov asked me to introduce him at a major awards conference and ceremony held jointly at Harvard and MIT. At the time, Asimov was president of the American Humanist Association while I was its vice president and board chair.

“My first contact with Isaac Asimov,” I began my introduction, “was forty-four years ago when as a high school freshman I bought my first issue of Astounding Science Fiction, which contained one of his short stories.” And I held up my copy of the October 1944 issue of Astounding. When I wound up my intro, I said, “Isaac Asimov is not a Renaissance man; he is a one-man Renaissance.”

Alec Nevala-Lee’s book is a well-researched, well-documented, well-written history of the leading science fiction (SF) magazine during the genre’s “golden age,” a twenty-or-so-year period in the middle of the twentieth century, together with fascinating, inextricably intertwined biographies of its leading figures: editor Campbell and writers Asimov, Heinlein, and Hubbard.

Campbell comes across as an energetic, capable editor who went all-out to cultivate and promote the three writers mentioned in the title. Campbell’s worst feature was his uncritical endorsement of Hubbard’s goofy “dianetics” movement around 1950, which later morphed into Hubbard’s Church of Scientology. Heinlein is seen as an excellent, prolific writer in the genre who, oddly, moved politically during his lifetime from liberal to conservative. Hubbard is exposed as an unstable, unethical, unhinged, narcissistic opportunist who bears an uncanny resemblance to the most prominent political figure in America today. Nevala-Lee writes that Hubbard is reliably reported as saying that the best way to make money would be to start a religion.

Asimov is clearly the most sympathetic and exemplary figure in the book. Born in 1920 in Russia, he grew up in Brooklyn in a hardworking family of limited means, started college at fifteen, and ended up with a doctorate in science. Averse to travel, he spent nearly all his life in New York and Boston. With a photographic memory and boundless energy, he wrote or edited an astonishing 500 books in his lifetime, which ended prematurely in 1992 from an infection he had contracted during open heart surgery years previously. A humanist all his life, Asimov’s writings are an important contribution not only to humanism but also to nearly every genre in the library.

Astounding is a great read. Additional useful information on Asimov, Hubbard, and Scientology is accessible online through Wikipedia.

Science fiction, like everything else, ranges from good to bad. Too much of it is juvenile and low on science. Good SF is represented by such books as George Orwell’s 1984 and novels such as Harry Turtledove’s Ruled Britannia and The Guns of the South. SF on film tends to be juvenile, violent, and silly, with exceptions such as the excellent 2015 Ridley Scott flick with Matt Damon, The Martian.

Introduction: Nones and the Vote

Are the Nones Up for Challenging the Religious Right?

The Nones Are Diverse and Growing. So How Do We Mobilize Them?

Researchers and ‘No Religious Affiliation’:  How Terms Such as Spirituality and Sacred Mask Atheism

Why Do Fundamentalists Lie about the Bible?