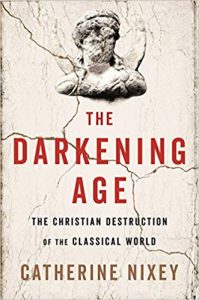 In the final centuries of the Roman Empire, the Christian Church, as part of “God’s will,” annihilated the classical world of architecture, sculpture, painting, and literature to rid the world of “demonic” elements of the “pagan” world. This was done with the approval of the imperial leadership. Catherine Nixey’s book describing this saga of a developing extinct world was written by the daughter of a Roman Catholic monk and nun who was trained in classics at Cambridge University and later became a journalist for the Times of London. This, her first book, won the Royal Society of Literature Jerwood Award.

This compelling and gripping work describes how the Christian onslaught of classical Roman and Greek cultures and civilizations plunged Western Europe into an intellectual darkness that would take almost 800 years to unravel. The rise of Christianity from the second to the sixth centuries CE not only destroyed most of the classical past but also threatened anyone who would not conform to its teachings and become a believer. In many instances, those who refused to convert were massacred by Christian zealots or killed by friends or family members for their “apostasy.” This is an eye-opener for those who think that Christianity was the saving grace of “pagan” civilization and kept the Latin and Greek of the classical world alive in the turbulent Middle Ages until it could be brought to new life in the Renaissance. Only approximately 5 percent of classical literature has survived. The conventional and appealing narrative of the Catholic Church over the centuries has almost totally obscured this earlier and less glorious story of malevolence and destruction. For before the Church “preserved, it destroyed.”

This leads the reader to ask why this obfuscation occurred. Nixey answers by demonstrating how Christian destruction of classical culture, so little known outside of some contemporary academic circles, has largely been written by Christian apologist historians with a different story: one that obliterates the damage done by the votaries of their faith. Many Christian historians, even today, have offered the polemic that the Romans had really been “Christians-in-waiting,” generally most willing to give up their polytheistic rituals as soon as some monotheistic religion appeared.  Even within academic circles and in university history departments such as those in which I trained and taught, this story of Christian destruction of classical culture was ignored. We all need to keep in mind that history is always written by the winners, not the losers, and the winners in this saga were the Christians.

The author writes what she terms “a sort of historical travelogue.” Her story of Christian destruction covers much of the Roman Empire, including Syria, Egypt, parts of Iraq, Iran, and areas of Turkey. She starts her story in Palmyra, Syria, in the 380s and ends her “travel” in 529 in Athens, Greece, where the philosopher Damascius and a small group of colleagues fled the city because of new imperial laws issued by the tyrant emperor Justinian essentially closing down the centuries-old Academy of Athens. In Palmyra, witnesses described swarms of upward of 500 men destroying temples. Giant stone columns that had stood for centuries collapsed in one day; statues that had stood for 500 years had their faces mutilated in a few minutes; a temple to Athena that had seen the rise of the Roman Empire fell in just one day.

Nixey details three instances of Christian savagery that were especially vivid to this reviewer. The first concerned the devastation of the great temple of Serapis in fourth century Alexandria, Egypt, by fanatical Christian zealots under the direction of their new bishop Theophilus. These vandals also managed to destroy what was left of the Great Library of Alexandria that was stored in the temple precinct for safekeeping. At its peak, the library had been home to thousands of volumes and was considered the largest library in the world.

Second of the heinous acts was the savage beating and killing of the great philosopher and woman mathematician, Hypathia, a native of Alexandria, by the parabalani—the “reckless ones”—young Christian men who carried off the dead and dying from plague. They were at the bottom of society, but they had faith and strength in their numbers, some 800 of them by the beginning of the fifth century. Hypathia represented everything they abhorred: philosophy, astronomy, and mathematical learning—the life of the mind. To the parabalani, Hypathia was a work of the Devil, a “creature of hell.” Anyone who was against Christianity in those days was seen as demon possessed. In 415, Hypathia suffered death under the guidance of a Church magistrate. The “pagan woman” was dragged through the streets, her clothes ripped from her body, and her skin scraped by broken pieces of pottery. After her death, her body was torn to pieces, and her remains were burned.

Third, Nixey expends withering criticism discussing the infamous sadist Egyptian monk Shenoute, now considered a saint. He was the builder of the renowned large White Monastery. Apparently, he was feared by all who knew him, monks and nuns alike, who if they did not do his bidding, especially in rooting out all the “demon possessed pagans,” would suffer harsh retribution. His minions committed unspeakable crimes against the non-Christian population. He was known to have declared that “there is no crime for those who have Christ.” He was a master of control, what Nixey refers to as “holy violence.”

This is certainly a challenging and resourceful book, giving a fresh and vivid understanding of a period shrouded in inattention, myth, and dismissal. Nixey has done a great service to scholarship by exposing a period of history that has been obscured, ignored, and deliberately perverted by Christian apologist historians and archeologists for centuries. Building on numerous classical sources and using extensive modern-day scholarly interpretations of them, along with modern archeological research and other scholarly studies, Nixey weaves this story of desecration through the lives of communities and individuals. This book, for the general or scholarly reader, will certainly open anyone’s eyes, especially humanists, atheists, and freethinkers in general. Hopefully it will find its way into the hands of Christian readers, who might be awakened by the author’s critical thinking and dramatic presentation of this neglected historical period.

Robert Louis Semes is a retired professor of history and former Episcopal priest. In 2004, he founded The Jefferson Center in Ashland, Oregon, a non-profit educational organization dedicated to fostering critical thinking and a secular worldview. He remains an Honorary Fellow of the organization. He has published several articles in scholarly journals on American social and political history. He lives in southern California and devotes his time to reading, writing, and professional genealogical research. Professor Semes is a member of the Center for Inquiry and other freethought organizations.


The Darkening Age: The Christian Destruction of the Classical World, by Catherine Nixey (Boston and New York: Houghton Mifflin Harcourt, 2018. ISBN 978-0544800885). 315 pp. Hardcover, $28.00.   In the final centuries of the Roman Empire, the Christian Church, as part of “God’s will,” annihilated the classical world of architecture, sculpture, painting, and literature to …

Introduction: Nones and the Vote

Are the Nones Up for Challenging the Religious Right?

The Nones Are Diverse and Growing. So How Do We Mobilize Them?

Researchers and ‘No Religious Affiliation’:  How Terms Such as Spirituality and Sacred Mask Atheism

Why Do Fundamentalists Lie about the Bible?