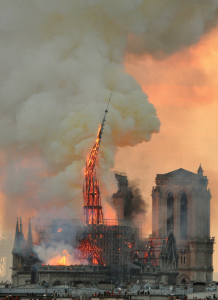 During “Holy Week” in April 2019, the Notre-Dame cathedral in Paris, an architectural gem dating back 850 years, was seriously damaged in an apparently accidental fire. Restoring it will cost about a billion dollars. The big question is: Who will pay for the extensive restoration? As the building is technically owned by the French government (thanks to the country’s interesting history of church-state relations), President Emmanuel Macron has said that the government will see to the restoration. But as much as the cathedral is a hot tourist attraction, it is, after all, a Catholic cathedral, not a Protestant church, Jewish synagogue, Muslim mosque, or Buddhist temple.

The Catholic Church could easily afford the billion dollars. After all, it annually rakes in billions of dollars in public funds for its schools and other institutions from governments in the United States, Canada, Australia, Britain, Germany, Austria, Italy, Spain, Chile, and other countries. If necessary, it could even sell off some of its hoard of artistic treasures. And since there are over a billion at least nominal Catholics in the world, the billion-dollar restoration would only require one dollar per communicant.

But aside from all that, within a couple days after the fire, several wealthy Europeans pledged nearly a billion dollars for the restoration. Some of them were not even Catholics! So, here’s an idea. Because the Church and its members could easily afford to repair the cathedral, and because the Vatican’s ban on contraception and abortion has contributed enormously to the overpopulation that fuels the climate change that threatens our whole planet, why don’t these wealthy Europeans and other civic-minded folks with checkbooks simply donate that billion dollars to family planning agencies that are helping poor countries deal with overpopulation—especially now that climate-change-denier Trump has pulled the United States back from helping deal with the problem? (I acknowledge, of course, that most Catholics are okay with contraception and abortion, but they have no voice in official church policy.)

To Hell with Horace Mann?

The war on the public schools that serve nearly 90 percent of America’s kids is showing no signs of slowing. The war’s components: vouchers and tax credits for religious and other private schools; the push for charter schools, far too many of which are for-profit scams; overtesting; under- and uneven funding; media inattention; billionaire-funded propaganda; union-busting; the policies of George W. and Jeb Bush, Joel Klein, Michelle Rhee, Arne Duncan, Donald Trump, Mike Pence, Betsy DeVos; and so on. A great resource for fending off these attacks is veteran educator Diane Ravitch’s excellent new book, The Wisdom and Wit of Diane Ravitch (Garn Press, 2019, 449 pp.). A collection of many of her writings from early 2010 to mid-2018, it names names, presents an abundance of facts, and does not hesitate to criticize Democrats as well as Republicans. Worth mentioning also is Diane Ravitch’s blog, which every day brings a wealth of up-to-date news on the war on public education.

On April 26, 2019, the Kansas Supreme Court ruled 6-1 in favor of every woman’s right to have an abortion. The religious Right, of course, erupted in anger and threats to amend the state constitution. But let’s see what the Kansas constitution says in its Bill of Rights: “The right to worship God according to the dictates of conscience shall not be infringed: nor shall any control of or interference with the rights of conscience be permitted … .” What could be clearer? And four days later, Oklahoma’s supreme court by 7-1 ruled unconstitutional a 2014 GOP-passed state law banning drug-induced abortions. Then in mid-May, the fundy-dominated Alabama legislature passed the country’s most stringent anti-abortion law, part of a strategy to get the majority Republican Supreme Court to vacate or reverse Roe v. Wade.

In April, Florida’s GOP-dominated legislature passed another bill to divert public funds to church-run private schools through vouchers. These bozos not only thumbed their noses at the Florida voters who rejected vouchers in the 2012 referendum, but also seem unable to read the state constitution, which states that “No revenue of the state or any political subdivision or agency thereof shall ever be taken from the public treasury directly or indirectly in aid of any church, sect, or religious denomination or in aid of any sectarian institution.”

Biological evolution is well-established fact. Not so well known or appreciated, however, is the accompanying evolution of emotions and the mental and social life of humans and our mammalian relatives. In his twelfth book, a wonderfully readable five-star gem, Mama’s Last Hug: Animal Emotions and What They Tell Us about Ourselves (W. W. Norton, 2019, 326 pp., $27.95), leading primatologist Frans de Waal details how closely related are the emotional, mental, and social lives of humans, great apes (bonobos, chimpanzees, gorillas, orangutans), and other mammals from whales to dogs, cats, and cows, plus even less developed vertebrates.

De Waal shows that apes and other mammals not only have complex emotional and social lives but also demonstrate memory and the ability to plan ahead. For example, a chimp will gather sticks to use in accessing termites to eat, will sleep all night, and then get up in the morning and take the sticks to the termite nest a mile or so away. Apes establish complicated social hierarchies, with alpha males on top and a similar arrangement for females. De Waal highlights the differences between the rather violent and patriarchal chimps and the very similar but peaceful and matriarchal bonobos. Of course, he acknowledges that with language, humans entered a whole new universe. But we may not be all that different than chimps, with a strutting, hooting, tweeting, bullying alpha male lodged in the White House (whom Bill Maher has likened to an orangutan).

Before reading the book, you might watch the video of primatologist Jan van Hooff’s last visit with the dying fifty-nine-year-old chimp Mama.

In addition to this highly recommended book, de Waal is also author of The Bonobo and the Atheist: In Search of Humanism among the Primates (W. W. Norton, 2013), which I plan to discuss in another column.

Democracy in our country is clearly in deep trouble. The causes: voter suppression, gerrymandering, low voter turnout, big money infusion, inadequate civics education in our schools, shrinkage of dependable media, media manipulation. Law professor and media commentator Joshua A. Douglas explores all this in his excellent new book, Vote For US (Prometheus Books, 2019, 350 pp.). Douglas concentrates on what local citizens can do to remedy the situation from the ground level up, as the problems vary from state to state and community to community. The book is non-partisan, though it is obvious that the rise of Donald Trump has only made matters worse. The book is crammed with examples of what local citizens have been doing on the local and state levels to remedy the mess and contains sixty-two pages of information on state and national organizations active in dealing with these problems. This well-documented book is easily worth five stars.


During “Holy Week” in April 2019, the Notre-Dame cathedral in Paris, an architectural gem dating back 850 years, was seriously damaged in an apparently accidental fire. Restoring it will cost about a billion dollars. The big question is: Who will pay for the extensive restoration? As the building is technically owned by the French government …

A New Natural Interpretation of the Empty Tomb

CFI Thinks Outside the Pox

Meanwhile, Back at the Chasm …

On (Soon!) Becoming a U.S. Citizen

Why the Catholic Church Can Never Be Reformed

25 Years Ago in Free Inquiry