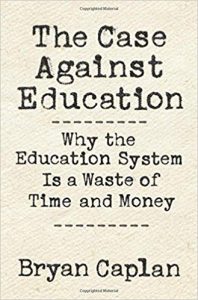 This truly awful screed is reviewed here only because it has received peculiarly favorable ratings on Amazon and because it was extruded by, and therefore has stained the reputation of, its generally respected publisher.

Its author, an admittedly extreme libertarian, is an economics professor at George Mason University. This public institution in Virginia, favored by the Koch Brothers, recently named its law school after the late Justice Scalia. It was originally to have been called the Antonin Scalia School of Law (ASSOL) until the university realized the amusement that would generate.

Caplan devotes most of the book to trashing schools, not just public schools but all schools. To paraphrase the author, “We don’t need no stinkin’ overpade teechrz  teechin’ kids about litterchur, hisstry, sighunce, evilooshun, geomitree, langwidges, muzik, art, fizz ed, gummint, siviks, and stuff like that.” Caplan makes it clear that education’s sole aim should be preparing kids for jobs. He thinks that online education is wonderful. He’s apparently inexcusably unfamiliar with the flood of failures and scams involving such programs. He even goes so far as to trash child labor laws dating back many decades.

Caplan, from his comfy post at George Mason, pretends not to know the benefits of socializing kids, helping them to develop well-rounded personalities, diagnosing and dealing with the physical and mental problems that too many kids have, and preparing them for citizenship in a democracy. He is oblivious to the mindboggling flood of familial and societal disruptions that would inevitably follow attempts to implement his wacky ideas.

Let’s let Caplan speak for himself:

I favor full separation of school and state. Government should stop using tax dollars to fund education of any kind. Schools—primary, secondary, and tertiary alike—should be funded solely by fees and private charity … Most libertarians dream of a voucher system, where schools are private but funding is public … If I  had to leave tax-funded education one final toehold, I’d pick a modest, means-tested voucher program for primary education.

Simply put, Caplan would evidently like to see our society return to the Middle Ages, with a small super-rich oligarchy on top, a shrinking middle class, and a growing peasant class on the bottom to do all the dirty work.

Of course our public schools could stand improvement, just like every other institution in our society. But Caplan writes not a word about what experienced, serious educators have been saying about what needs to be done to improve our public schools to best serve all our kids. To summarize: we need more adequate and more equitably distributed funding; smaller classes, especially at the lower levels; sufficient school nurses, librarians, and counselors; wraparound social and medical services (note that half of public school students qualify for free or discounted lunches because of family poverty); some modernization of curricula; and an end to the massive diversion of public funds to sectarian and other private schools through vouchers, tax credits, and other gimmicks, as well as to charter schools, far too many of which are for-profit and exist only as part of schemes to privatize education and undermine teacher unions.

Caplan seems unaware that forty years of PDK education polls have shown that more than two thirds of all Americans give an A or B grade (76 percent in 2019) to the public school attended by their oldest child, despite the deficiencies that should concern all of us.

As Ambrose Bierce would have put it, this book’s covers are too far apart. An environmentalist would mourn the trees that were cut down to produce it.


The Case Against Education: Why the Education System Is a Waste of Time and Money, by Bryan Caplan (Princeton, NJ: Princeton University Press, 2018, ISBN 978-0-17465-5). 395 pp. Hardcover, $29.95.   This truly awful screed is reviewed here only because it has received peculiarly favorable ratings on Amazon and because it was extruded by, and therefore …

A Troubling Case: The International Trial of a Ugandan Soldier

Humanism Behind Bars: An Insider’s Perspective

Humanism and Prisoners’ Rights: A Reply to Jon Guy

If I Were Black, I Wouldn’t Believe Me Either: Reflections of a White Overpopulation Activist

Who or What Was the First Cause?

A Refutation of John Gray’s Rejection of Humanism

Where to Draw Lines on Assisted Dying