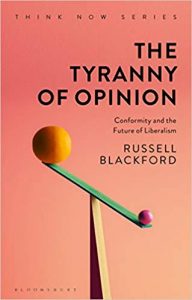 A liberal Muslim who opposes Islamists, is critical of Islamic fundamentalism, and calls for Muslims to accept secular government is labeled an anti-Muslim extremist by the Southern Poverty Law Center.

An associate master at a Yale residential college questions the wisdom of an email from a Yale administrative body that warns students not to wear offensive Halloween costumes. In response, numerous letters denounce her and demand her removal. She eventually resigns.

A noted evolutionary biologist who is harshly critical of all religions is deplatformed after the self-styled progressive radio station sponsoring his talk concludes some of his tweets have been abusive toward Islam.

A university professor publishes a work advancing an original theory about the types of individuals who seek male-to-female gender reassignments. Although the professor supports the right of transgender people to transition and pursue the treatment they consider appropriate, his work is met with a vituperative storm of criticism, including threats of violence and efforts to have him dismissed from his position.

Events such as these have now become frequent occurrences. Although they all involve efforts to punish persons for their speech, these are not the traditional cases of suppression of free speech, because they involve nongovernmental actors. Instead, private organizations or groups of individuals try to silence those who have said something deemed offensive. Such actions are the primary concern of philosopher, social critic, and Free Inquiry columnist Russell Blackford in The Tyranny of Opinion.

Blackford begins his book with an analysis of the reasons for protecting freedom of speech. Acknowledging his debt to John Stuart Mill, Blackford contends that liberty of thought and discussion is important for our quest for truth. History confirms that progress, especially with respect to scientific understanding, is possible only when people are free to challenge prevailing viewpoints. But the value of free expression goes beyond its contributions to the marketplace of ideas. There is also the intrinsic value of being free to express oneself; an individual’s human dignity is intimately connected to this freedom.

Given the importance he assigns to free expression, it’s no surprise that Blackford believes anyone who would restrict free expression bears a heavy burden of justification. He contends that the only legitimate occasion for suppressing speech, either through government restrictions or social pressure, is when the speech causes direct harm. Blackford concedes that there is not unanimity regarding what constitutes “harm,” but, with limited exceptions (think of an explicit ad for child pornography on a subway car), expression that merely offends should not be suppressed. Among other reasons, if offense is a sufficient ground for restricting speech, speech regarding any religious or ideological belief ardently held by a significant portion of the population will be immune from criticism.

The points Blackford makes with respect to government interference with speech are unlikely to encounter much disagreement, at least in Western democracies. However, as indicated, Blackford’s focus—and the feature that distinguishes his book from other treatments of free expression—is on social pressure placed on persons who do not conform to orthodoxies on either the Right or Left. The pressure is applied though social media campaigns, boycotts, no-platforming efforts, attempts to have the offending speaker fired, and, in some instances, physical intimidation. A good portion of the book is devoted to summarizing some of the more notable incidents of the past decade.

Blackford views such campaigns as dangerous to the values of free expression. Not only do they punish the individual who has expressed the offensive words, but they can cause others to remain silent or to disguise their true views. Moreover, society as a whole is a loser as these suppressive efforts impoverish our public debate and deprive us of the opportunity to be exposed to ideas that may merit consideration.

Blackford is even-handed in condemning coercive campaigns by ideologues across the political spectrum, but it is fair to say that he is especially pained by the conduct of the Left. Blackford himself is a left-wing liberal, but he is a liberal in the Enlightenment tradition, which is to say he highly values liberty, free inquiry, individuality, and creativity. He laments the fact that many on the Left have adopted what he refers to as revisionist or identity liberalism. The revisionist liberals don’t place a high value on free speech—they may even sarcastically refer to it as “freeze peach”; instead, their overriding concern is to protect certain demographic or cultural groups (such as women, African Americans, LGBTQ individuals, and Muslims) from words or expressive conduct they may find offensive or demeaning. This concern even extends to proscribing “cultural appropriation.” If you’re a white non-Muslim author, don’t even think about writing a novel with a major character from Somalia.

So, what’s the remedy? Blackford candidly concedes there is no quick solution. For the most part, laws and regulations can’t address the social pressure that suppresses speech. We need a reform in behavior. Recognizing that the identity liberals are not likely to change tactics anytime soon, Blackford calls upon those of us who adhere to Enlightenment values to speak up. To begin, despite the legitimate fear some may have about being ostracized, or worse, for expressing their true views, Blackford encourages us always to speak honestly. In addition, we should defend those who are targets of suppressive campaigns when these targets are not proponents of violence but are instead merely engaging in expression that runs afoul of the taboos of the Right or Left. Defending the right of others to express themselves does not imply agreement with their views. Somehow this fundamental point has been lost amid the clamor of ideologues.

Blackford counsels us to not shout down rival ideas but to meet them with rational criticism. His book exemplifies this approach. The Tyranny of Opinion is devoid of bombast and bluster, instead presenting a thoughtful, compelling, carefully constructed set of arguments in support of free expression. Highly recommended.

Ronald A. Lindsay is the former president and CEO of the Center for Inquiry. Currently, he is senior research fellow for CFI and adjunct professor of philosophy at Prince George’s Community College.


The Tyranny of Opinion: Conformity and the Future of Liberalism, by Russell Blackford (London: Bloomsbury Academic, 2019, ISBN 978-1-3500-5600-8). 244 pp. Paperback, $26.95.   A liberal Muslim who opposes Islamists, is critical of Islamic fundamentalism, and calls for Muslims to accept secular government is labeled an anti-Muslim extremist by the Southern Poverty Law Center. An …

A Troubling Case: The International Trial of a Ugandan Soldier

Humanism Behind Bars: An Insider’s Perspective

Humanism and Prisoners’ Rights: A Reply to Jon Guy

If I Were Black, I Wouldn’t Believe Me Either: Reflections of a White Overpopulation Activist

Who or What Was the First Cause?

A Refutation of John Gray’s Rejection of Humanism

Where to Draw Lines on Assisted Dying