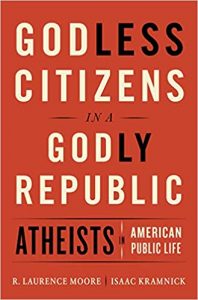 Isaac Kramnick and R. Laurence Moore’s new book, Godless Citizens in a Godly Republic, carries the subtitle Atheists in American Public Life. But it could just as easily have been 400 Years of Atheists Getting the Shaft in America. This brief volume is a concise summary of the many ways nonbelievers have been relegated to second-class citizenship over the years, legally and culturally. While much of the territory is familiar to humanists who know history, seeing it all in one place can’t help but fill the reader with a fresh sense of outrage.

Moore and Kramnick, both professors emeritus at Cornell University, make the point that atheists have been convenient foils ever since Europeans began living in North America. Early versions of religious liberty, such as the view John Locke outlined in his famous “Letter Concerning Toleration,” went only so far; the right to reject belief in God wasn’t protected.

An occasional iconoclast such as Roger Williams, the ex-Puritan minister who founded Rhode Island, could conceive of a vision of religious freedom that encompassed the right not to believe, but most people simply could not get there. A common belief in colonial and post-colonial America (which, sadly, persists to this day) is that nonbelief equals amorality. Without a belief in a future state of reward and punishment, what’s to keep a person in line?

A broader understanding of religious freedom did eventually take place in the new nation after the Revolution, but that did little to squelch anti-atheist bias. Some states even codified it in their state constitutions by including provisions that restrict the ability of atheists to hold public office. (Thanks to the U.S. Supreme Court, these provisions can no longer be enforced; however, they remain in eight state constitutions, which understandably rankles those of no faith.)

Moore and Kramnick, who earlier authored The Godless Constitution (an introductory volume about separation of church and state I’ve recommended to many people over the years), tell the story of four centuries of bias against atheists with real verve. One reads of early citizens being arrested for blasphemy and sermons by pastors who boldly asserted that no atheist could be a good citizen.

The authors’ discussion of Robert Green Ingersoll is a compelling example. The “Great Agnostic” is a hero to many humanists today but is largely forgotten by just about everyone else. Ingersoll, Moore and Kramnick note, would likely have had a much more high-profile career, perhaps even claimed high office, if he had simply downplayed his skepticism of Christianity. Instead, he gave speeches about it. Reading this section, one can’t help but wonder how many other people have decided not to pursue careers in public service because they didn’t want to hide who they were.

But Moore and Kramnick really excel in their extended discussion of “civil religion”—sometimes also called “ceremonial deism”—which is defined as the tendency of government to endorse religion in a generic way.

Humanists are confronted with this phenomenon on a daily basis; it is as close as the coins rattling in your pocket. It likely manifested itself this morning when your children or grandchildren recited a schoolroom pledge that states we are one nation “under God.” It is thrust into our faces when we visit government buildings, many of which are now festooned with large signs reading “IN GOD WE TRUST.” It’s our national motto, after all.

Although these practices have been blessed by courts, they’re far from benign. Moore and Kramnick rightly argue that compelling or pressuring citizens to make a religious affirmation as a condition of expressing patriotism relegates nonbelievers to second-class citizenship.

Arguments against civil religion often boil down to claims that rote repetition of a religious phrase strips it of any spiritual significance. Religious people ought to be the first ones alarmed by this, but they’re not—because they know the assertion is patently absurd. “In God We Trust” is clearly a religious statement. It asserts that there is one god (not five, twenty, or none). It maintains that there is some important value in trusting in this deity; it’s what real Americans do. If you choose not to, maybe there’s something wrong with you. A phrase with God at its core simply cannot be secularized, no matter how many times it is recited.

As Moore and Kramnick write:

When people pray or read from a text that they consider sacred, they are doing something with religious meaning and therefore something that nonreligious people cannot and should not share. Empty formulas, which are what the tenets of “ceremonial deism” amount to, are of no use to believers or nonbelievers. When repeated again and again, they seriously damage the clarity of our language and thought.

Godless Citizens in a Godly Republic contains one of the best salvos against civil religion I’ve ever seen in a book intended for popular consumption. We’re long overdue for a serious national conversation about this issue. If this book jump-starts it, so much the better.

Moore and Kramnick conclude the book with a survey of the nation’s most prominent secularist organizations (American Atheists, American Humanist Association, Center for Inquiry [CFI], Secular Coalition for America, Freedom From Religion Foundation, and others) and take a look what they call the “Atheist Awakening.” They note the differences in tone and style among these groups and the leading advocates of atheism. (Some Free Inquiry readers might dispute the authors’ contention that CFI has “recently become radicalized.”) Moore and Kramnick call on nonbelievers to resist the temptation to portray all believers as dumb, arguing that this attitude “reinforces a perception that nonbelievers are unfeeling elitists.” They also suggest the creation of what they call “The Secular Project,” a foundation that would fund efforts designed to “safeguard our planet, to eliminate human suffering anywhere in the world, and to promote peace.” The idea is to demonstrate to religious people that it’s possible to do good works with an entirely secular motivation.

Written in a user-friendly and non-polemical style, Godless Citizens in a Godly Republic would be a good volume to give to your religious friends and family members who dismiss the idea that discrimination against nonbelievers is a real, ongoing problem. As Moore and Kramnick note, it’s only recently that the number of Americans who said they’d be willing to vote for an atheist for president cracked 50 percent, and large numbers still say they wouldn’t want their son or daughter to marry an atheist.

The two also raise an interesting point that should be obvious but that many Americans overlook: When we treat people poorly simply because they don’t acknowledge a deity, we fail to uphold the promise of our nation. “Every political speech and every ceremonial occasion excluding nonbelievers or suggesting that they are second-class citizens demeans our democracy,” they write.

Indeed. Such prejudice, which would not be tolerated against any other class of Americans, also prevents atheists from bringing their talents fully to bear in public life. It’s time for a change, and Godless Citizens in a Godly Republic succinctly makes the case that now is the time for it to happen.

Rob Boston is senior policy analyst at Americans United for Separation of Church and State in Washington, D.C.