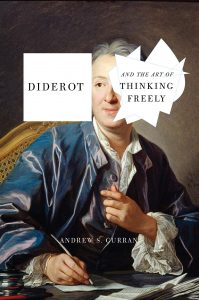 “Skepticism is the first step toward truth.”

Denis Diderot just wanted to level the playing field: religious zealots on one side, and he and his fellow atheists on the other.

Unfortunately, it was not 2019. It was 1749, and the French tossed him in prison. We learn from Andrew S. Curran’s splendidly written and illustrated Diderot and the Art of Thinking Freely that the Langres-born philosopher had the blessings and support of his family when his father thought the junior Diderot was going to join and serve the church through the Carmelite monastery. Instead he just borrowed money, married a laundress, and fell in with Paris’s doubters and freethinkers.

But that was Diderot, the sometimes scoundrel, sometimes literary genius. Curran writes: “Far from bringing people (the world) together, it seemed that each religious faction saw their adversaries as either spiritual infidels or political foes that needed to be crushed.” Leaving God was not a selfish act. It was transformative and illuminating.

The William Armstrong Professor of Humanities at Wesleyan University, Curran allows us to travel in time back to the life of the philosophe famous for his world-changing, multivolume Encyclopedie (comprising 70,000 articles), by relying on original sources, from letters to police reports and more. Thus, as a freethinker, it’s easy to be moved and inspired by the man who wiggled his way to the top of democratic philosophy.

Of Diderot’s incarceration at Vincennes, Curran says, “While the philosophe was confined to an insalubrious room in the dungeon tower,” the warden was instructed “to treat him decently. … This meant Diderot was to receive his food at the king’s expense … .” So, Diderot could receive two candles per day and pot roast or tripe with wine, while other less favored prisoners sat in cold, dark cells with only bread and water—for life.

Imprisoned for three months for atheistic, satirical, and pornographic writings, Diderot was freed on the promise that he not publish again. He was thirty-six. And this was the turning point. Diderot’s “freeform journalistic voice” would not be silenced, though he did shy away from blatantly controversial subjects for thirty-three years. Curran notes:

Before prison, Diderot had been a journeyman translator, the editor of an unpublished encyclopedia, and a relatively unknown author of clandestine works of heterodoxy; on the day he walked out of Vincennes, he was forever branded as one of the most dangerous evangelists of freethinking and atheism in the country.

Created with coauthor and coresearcher Jean le Rond d’Alembert, the Encyclopedie was to be Diderot’s masterwork, founded on “replacing a theologically compatible theory of cognition with one that had little room for either the soul or an innate awareness of God’s existence.”

Rather than taking possession of Diderot, Curran is a smart biographer who allows his subject to be human, failing to take responsibility for his actions and embracing existence “fully, completely, and audaciously.”

Curran highlights the celebrities of Diderot’s eighteenth century and his relationships with them: Catherine the Great, Rousseau, Voltaire, and others. The United States of America interested Diderot as well. He wrote that it could be a superpower on the world stage if slavery were eliminated. Though Diderot called America the “land of tolerance, morals, laws, virtue, and liberty,” he warned that an uneven distribution of wealth, class tensions, and the possible rise of a dictator would bring the democratic country to its knees.