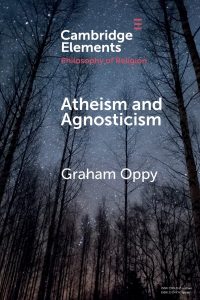 The Cambridge Elements series aims to provide brief, authoritative introductions to subjects of interest. This volume delivers admirably. At sixty-seven pages, it’s nearly too short to stand alone as a book. But the compact text by Monash University (Australia) philosopher of religion Graham Oppy works overtime, providing a precise and exacting exploration of atheism, agnosticism, and the distinctions between them. The result is a technical philosophical exposition that presents Oppy’s views with deductive clarity. While rigorous, the text is not so rarefied as to discourage a reader of non-philosophical background. Quite the contrary, this is some of the most accessible philosophical writing at this level of rigor that I’ve had the pleasure to read.

Oppy carefully characterizes atheism and agnosticism, distinguishes them from similar worldviews, and presents an orderly, even elegant argument for his own position that atheism provides the most useful “big picture” of the cosmos and humanity’s place in it. Specifically, he argues that as a class naturalistic “big pictures” are superior to supernaturalistic ones and that among the naturalistic worldviews, atheism is the most powerful.

Between atheism and agnosticism, Oppy’s choice is clear: “I am an atheist: when I make the best evaluation that I can of all relevant considerations, I come down on the side of the claim that there are no gods.” Still, he treats agnosticism with respect, arguing clearly why it is preferable to theistic viewpoints. For him, agnosticism is inferior—slightly, if significantly—only to atheism.

Oppy frankly defends his personal view of atheism and agnosticism, which some philosophers and movement activists (myself included) will find controversial. “Atheists believe that there are no gods, agnostics suspend judgment whether there are no gods.” That is, Oppy contends that atheism necessarily entails a positive denial that gods exist, not the mere absence of god-belief. Further, he regards atheism and agnosticism as mutually incompatible: “There cannot be someone who clearly belongs to more than one of these categories.” Therefore no one can be an atheist and an agnostic. That stance is eminently defensible, but others see things differently.

Casual discussion often imagines atheism and agnosticism as adjacent points on a single continuum: atheists are confident that God does not exist while agnostics cannot decide between atheism and theism. Oppy aptly criticizes this somewhat naive concept, but he accepts one of the notions it implies: namely, that atheism and agnosticism cannot coherently be held together. There is (at least) one other view, on which atheism is defined as an absence of belief in gods or the supernatural (following the word’s Greek roots: a theos, the absence of gods). This is an existential position as to whether a divine being exists. In contrast, agnosticism is an epistemological position, holding that the question whether a god exists cannot be resolved because that is unknowable. Agnostics may contend the question of divine existence cannot be settled because the terms of the argument are indefinable or not meaningful (What is a god, anyway?) or because human knowledge is insufficient to prise out an answer (How could finite beings bring closure to a question about an allegedly infinite being?). This position agrees with Oppy that atheism and agnosticism belong to separate categories, rejecting the notion that they occupy two points on one continuum. But it disagrees with Oppy that the two categories are mutually exclusive.

Why does this matter? If atheism is existential and agnosticism epistemological, I and others would argue that there’s no reason one person cannot coherently hold both. For example, one could embrace the agnostic view that it’s unknowable whether God exists, then proceed directly to an atheist position that therefore there is no reason to posit that so improbable a being exists. That’s the conclusion Isaac Asimov (1920–1992) defended in these pages when he famously declared, “I don’t have the evidence to prove that God doesn’t exist, but I so strongly suspect he doesn’t that I don’t want to waste my time.”* (Obviously this approach presumes the more permissive definition of atheism as the mere absence of god-belief, contra Oppy.)

This alternative view of atheism and agnosticism is not without defenders. In the academy, philosopher Paul Draper espouses it in his “Atheism and Agnosticism” entry in The Stanford Encyclopedia of Philosophy. In the humanist/atheist/freethought movement, prominent adherents have included Gordon Stein, editor of the original Encyclopedia of Unbelief** (Prometheus Books, 1985); Austin Cline, the original content expert on atheism for About.com (now Thoughtco.com); and me. I could extend this list—historically, Bertrand Russell implicitly acknowledged agnosticism’s special epistemic status, while Thomas Henry Huxley’s introduction of the term agnostic in 1869 turned entirely upon epistemology. But I think we can take it as established that support exists for these propositions:

I consider it unfortunate that Oppy did not engage these ideas explicitly. He never summarizes these contentions and never argues against them. In fairness, Oppy might counter that his arguments for his view of atheism and agnosticism are powerful enough to establish his viewpoint in opposition to theism without his needing to engage minority positions from inside the nontheist community.

If you are the sort of unbeliever who thinks a proper atheist must deny God’s existence (a position often termed strong or hard atheism) and that one can be either an atheist or an agnostic but never both, Oppy’s Atheism and Agnosticism will be an unalloyed delight, arguing compactly and powerfully for your point of view as no single text has until now. If you’re not, Oppy’s book is still immensely worth reading. Among other things, his defense of naturalism contra supernaturalism is deep-rooted and instructive, even if you disagree with where he goes from there. Buy this book, celebrate pellucid thought in prose, and (depending on your own convictions) caveat lector.


Atheism and Agnosticism, by Graham Oppy (Elements in the Philosophy of Religion Series, Cambridge University Press, 2018, ISBN 978-1108454728). 67 pp. Softcover, $18.00.   The Cambridge Elements series aims to provide brief, authoritative introductions to subjects of interest. This volume delivers admirably. At sixty-seven pages, it’s nearly too short to stand alone as a book. …