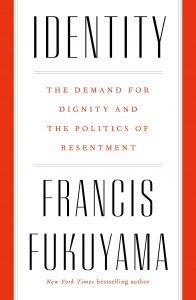 Francis Fukuyama’s 1992 book The End of History and the Last Man importantly broadened my political perspective. Now he’s written Identity—the Demand for Dignity and the Politics of Resentment.

A key concept in The End of History was thymos. Man does not live by bread alone. Thymos is an ancient Greek word referring to a desire for status and dignity or the recognition of one’s human worth. It looms large in all matters political. For example, the push for gay marriage was a thymotic quest by gay people. Similarly, the pay equity issue is more about respect than money.

Identity carries this idea forward, as it becomes central to understanding today’s political situation. Fukuyama distinguishes between megalothymos in aristocratic systems, with dignity accruing to superiority (for some), and isothymos, the modern democratic concept of equal dignity for all.

But it’s not that simple. “Who am I, really?” is a modern question. It would not have occurred to those in pre-modern societies where identity was totally, immutably fixed by social context. And while who you are outwardly may seem clear enough, your idea of personal identity rooted inside is a more slippery concept.

Fukuyama sees Jean-Jacques Rousseau (writing in the late 1700s) as seminal here. Rousseau idealized people in the state of nature, with society actually being a corrupting force, an obstacle to the realization of one’s human potential. Rousseau would have said a craving for thymos is something that can have meaning only in a social context, yet society actually impedes its achievement—a Catch-22 dooming us to unhappiness. But Fukuyama thinks social existence is of the essence in human life, so it’s meaningless to posit its absence. It’s through society that our thymotic cravings play out—and their satisfaction is finally being enabled by modern liberal democracy. (That was the chief point in The End of History.)

Fukuyama spells out his take on today’s evolved concept of identity: the distinction between inner and outer selves; valuation of the inner self above social demands; its dignity resting on moral freedom in which all human beings share. But then we come to a fork in the road. One path emphasizes individual fulfillment, the other a collective identity. And while the latter, in the guise of overtly collectivist systems such as communism, has largely proven a dead end, collective identity has lately recrudesced in ethno-nationalism and politicized religion (not only among Muslims but also American Christians).

One might have expected the 2008 economic crisis, with rising inequality and a stressed working class, to spark a big surge for the populist left. Yet the opposite happened, especially in the United States, electing Trump, and in Britain’s Brexit (though both were close votes). Fukuyama finds the explanation in how economic motivations are intertwined with identity issues in human behavior. Again, it’s thymos. In particular, immigration is seen on the right as a threat to the nation’s traditional culture and undermining respect for those identifying with it.

But perhaps the left just hasn’t had a good answer for the economic problems coming to the fore. Fukuyama says the traditional left is now long on rhetoric but short on actual workable policies. The essence of its project—to increase socio-economic equality through state power—has reached its limits.

He also thinks it’s a problem that the principle of universal equal recognition has mutated into special recognition for particular groups. And those are mainly groups with whom less-educated working-class whites don’t identify or feel solidarity. Thus, the left with its identity politics has actually lost touch with what used to be its own core identity group.

This identity politics also diverts attention from society’s most salient inequality, namely that between educational levels. This will only grow more acute as technology, the biggest factor behind it, advances. Progressives have little to say about this (and what they do say is often unhelpful—battling school choice and in effect defending an abysmal educational status quo for the underclass you might think they’d champion).

Fukuyama notes the rise of the “self-esteem” idea, tying in with that of liberating and dignifying the inner self. And this points to another basic dichotomy: asking society to treat your group the same as others versus demanding respect for its differentness. The latter, Fukuyama says, has tended to win out. Thus “multiculturalism” and the idea of equal respect for cultures is contrasted with classical liberalism’s equal respect for human beings. Indeed, the left seems willing to sacrifice the latter on the altar of the former. (Some consider female genital mutilation or “honor” killings, for example, not wrong but merely culturally different).

Hence Fukuyama sees the idea of common humanity getting submerged in a celebration of differences. As though the black experience cannot be appreciated by whites; the “lived experience” of women is inherently terra incognita to non-women, with the next step being to delegitimize any differing viewpoint. And he deems it ironic that all this valorizes only certain approved identities while actually barring respect for some others: white, Western, Christian—male!—etc.

What a shock that there’s a backlash, a reassertion of such other identities. Fukuyama considers this whole dynamic (with associated censorious political correctness) bad for free reasoned discourse and liberal democracy itself. It’s torn apart when groups within society demonize one another as illegitimate threats to all that’s good and holy. This plays into the bitter partisan tribalism dividing America. Fukuyama says, “Societies need to protect the marginalized and excluded but they also need to achieve common goals.”

Note that while identity does come from inside oneself, most people actually conceive their identities in relation to other people: binding them with others in their groups, and also vis-à-vis other people whom they may see as not giving their group its due. Again, this centrifugal tendency among groups can unravel a liberal democracy whose organizing concept is groups coexisting, accepting each other’s legitimacy.

That’s a problem within a society. Then there’s nationalism, looking outward. The problem, Fukuyama writes, is not with nationalism per se but with a narrow, ethnically based, intolerant form that it has widely taken. There’s a better alternative: building national identity around a set of positive values. That’s America’s own story; our identity is uniquely grounded not in ethnicity or the like but in the American idea: constitutionalism, rule of law, democratic accountability, and all people being created equal.

Some actually see America as traducing such ideals, epitomized by Howard Zinn’s book, A People’s History of the United States, a litany of oppression, injustice, and illiberalism. Missing there is any sense of America’s progress in ameliorating and overcoming its defects. Which, for Fukuyama, in contrast, is the real story.

And we lift our lamp beside the golden door. That too is integral to our American identity, expressed in our national motto, e pluribus unum. The very fact that diverse people came here from every corner of the globe to join in the American enterprise is our crowning glory.

And so immigration doesn’t threaten our national identity—to the contrary, immigrants actually embody it more faithfully than do many native-born Americans who, for all their flag-waving, have lost their own consciousness of the nation’s true ideals and values.

Our identity in those ideals and values is what we must fight for.

Frank S. Robinson is a graduate of NYU Law School (1970) and served at the New York Public Service Commission as staff counsel and then administrative law judge (1977–97). He is the author of eight books, including Albany’s O’Connell Machine (1973), Children of the Dragon (a novel), The Case for Rational Optimism (2009), and Love Poems. Robinson is a professional coin dealer. He is married to the poet Therese Broderick and has a daughter, Elizabeth.

Time for Us to Stop Undercounting Ourselves – Really, Stop It

Are We Born to Believe?

Men without God: The Rise of Atheism in Saudi Arabia

Alleging Suicide Is a Human Right

What Was Your Pivot Point?

Trouble among the Tyrants

Making Sense of Surveys on Religion: Contradictions and Predictions