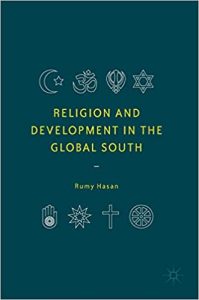 I agreed to review this book believing that Rumy Hasan had found and compiled compelling evidence that religion slows socio-economic development (that is how the book is described in promotional materials). The idea that religion may play a role in economic development is not novel. Previous scholars have suggested as much. But it is a complicated question to answer. If every highly developed country on the planet were secular and every less developed country were religious, there would be an obvious correlation and all that would remain would be to tease out causality (Does secularization lead to economic development or vice versa? Hint: it’s probably the vice versa). But if there are any exceptions—highly developed but religious countries and less developed but secular countries—this suggests the relationship between development and religiosity is even more complicated.

Hasan claimed in the introduction that he was going to explore this relationship. However, any analysis of the relationship between economic development and religiosity would require a dataset with multiple characteristics for each country, including obvious measures of economic development (such as HDI, GDP per capita) and religiosity (for example, percentage with a religious affiliation, frequency of service attendance, importance of religion, religious beliefs) and potential confounding variables (including type of government, years since independence, war status, years since most recent war, region of the world, and natural resources). Such an analysis would also likely involve a somewhat complex regression analysis or structural equation model to account for causality concerns. I was really looking forward to a book-length treatment of such issues.

Alas, that is not what this book delivered. The first chapter is a hodgepodge of references to a variety of theories that are more or (mostly) less directly related to the question at hand—religion and economic development. The treatment of theory in this chapter reads like a shallow literature review designed to illustrate to a graduate school advisor that the author has read broadly but not deeply; it lacked a coherent argument and jumped from theory to theory without building a coherent framework for this project.

The next four chapters explore specific religions—Islam, Christianity, Hinduism, and “Confucianism”—and their theological connections with economic development. (Astute readers will note that I put Confucianism in quotes because it isn’t a religion. It doesn’t belong in this list, but the author needed some characteristic to unify a discussion of Southeastern Asia [such as China, Japan, Taiwan, Hong Kong, and South Korea] and, bafflingly, chose Confucianism as that unifying characteristic.) Each of these chapters includes a description of the religion, references to possible doctrinal connections to economic development, and then a discussion of some of the countries that might be categorized as falling within that religious family and their level of economic development. The last chapter is a conclusion that, quite strangely, moves from the macro-oriented socio-religious discussion of the rest of the book to a micro-level psychological discussion of the effects of religion by introducing Piagetian cognitive development and making the claim that religion restricts entire countries or regions of the world to lower levels of cognitive development, a claim that is not backed by any empirical evidence.

Missing from all this discussion are the requisite statistical models that control for confounding variables and arrive at some indicator of at least a correlation between economic development and religiosity—but even better would be a causal model. Instead, the author engages in some of the clearest examples of “cherry-picking” data that I have ever seen. For instance, the highly developed countries of the Persian Gulf (such as Saudi Arabia, Qatar, Dubai) evince both high levels of religious affiliation and high levels of economic development. Rather than admit that these countries run counter to his argument that Islam stunts economic growth, the author dismisses them as outliers. Likewise, the author cherry-picks Christian and formerly Christian countries to suggest that Christianity was, per Max Weber, the source of capitalism, an argument that is overly simplistic, highly contested, ignorant of economic development and history, and fraught with problems. In essence, if a country doesn’t fit his over-simplified argument, the author relegates it to irrelevance, like he does here:

Rather than a complex, multi-level statistical model that recognizes limitations, the book provides a few tables that are selectively cited to support the author’s arguments, ignoring a lot of counterevidence.

Additionally, there is a general sense in the book—sometimes stated explicitly (see below)—that white Europeans are superior to everyone else on the planet. Hasan repeatedly falls into deterministic arguments, claiming that people are at the level of economic development they deserve because of their superior traits. Rich people have better traits, so they deserve to be rich. Consider this quote: “In addition, countries with a history of British rule are less corrupt—this stems from the common law system found in Britain and its former colonies being associated with superior government” (143). In a sense, the book reads as a justification for the economic dominance of Europeans over other regions of the world.

It may have been unfair of me to fault the author for not meeting my expectations of what would be required to establish that religion impedes economic development. However, my expectations are based on the evidence and methods that are necessary to accomplish what the author claimed was the intent of the book. Thus, in a sense, I was not holding the author to my standards but to the standards of social scientific inquiry. There are occasionally interesting insights in this book that suggest religion may have a role in impeding societal development, but they are largely lost in the inadequate methodology, irrelevant literature, and over-stated and over-simplified arguments.

Ryan T. Cragun is an assistant professor of sociology at the University of Tampa. His research interests include Mormonism and the nonreligious.

He is the author of more than a dozen peer-reviewed articles, including several for Free Inquiry, and half-dozen book chapters. His research is regularly featured in national media.


Religion and Development in the Global South, by Rumy Hasan (London: Palgrave Macmillan, 2017, ISBN 978-3-319-57062-4). 225 pp. Hardcover, $109.99.   I agreed to review this book believing that Rumy Hasan had found and compiled compelling evidence that religion slows socio-economic development (that is how the book is described in promotional materials). The idea that …

The Return of Ibn Warraq

Introduction: About those Other Apocalypses …

Why Climate Change Is an Irrelevance, Economic Growth Is a Myth, and Sustainability Is Forty Years Too Late

The Internet, the Virus, and Reason

Toward a More Democratic Atheism

The Keys to Irreverent Comedy

Is a Good God Logically Possible?

Miraculous Materialization of the Madonna? The Figure That Appeared in a Flash