After a lifetime spent reading great works of literature, I could not help finally facing the question of why religious topics were so frequently made the butt of jokes. Whether it was the works of Aristophanes or Homer, Ovid or Lucian, Boccaccio or Chaucer, Voltaire or Mark Twain, again and again I encountered great writers’ compelling desire to poke fun at people of faith, to skewer credos, to mock scriptures and gods, and to laugh at religion at large. Even today, in our secular and—some would say—post-magical world, some of our brightest creative talents, such as James Morrow, Neil Gaiman, or David Javerbaum, are persistently applying their humorous talent to God, angels, demons, saints, prophets, scriptures, doctrines, and rituals—topics that seem not only literally over-ripe for comical treatment but perhaps even passé. This persistent desire to bring religious topics and holy personages into the ambit of amusement and mockery surely warranted some sustained inquiry. I was further interested in finding out what distinguishes the humor of deeply Christian writers such as Boccaccio and Chaucer—or the grotesque scenarios of Dante—from the comical works of today’s most irreverent humorists. The answers to these (and other) questions are contained in my recent book Christianity and the Triumph of Humor: From Dante to David Javerbaum.1

As for the overarching question—Why is it that humor cannot seem to leave religion alone?—the answer is: boundaries! Humor is (sometimes fatally) attracted to all kinds of symbolical, social, legal, behavioral, and literal boundaries. That is one reason humor latches on to the legal system, zeroes in on ideological divisions, enjoys breaking sexual taboos, targets literal border walls, and gets involved again and again in the rules, axioms, prohibitions, distinctions, and doctrines of religion. Humor is a trickster found at the threshold, the boundary, the place of transition. And like a trickster, the nature of humor is shape-shifting, evasive, and unpredictable. On the one hand, humor aims to subvert and weaken existing boundaries, as evidenced in the countless jokes at the expense of tyrants, bureaucrats, and popes. The world’s despots have forever feared the subversive sting of jokes and satires because it rattles (although it does not usually weaken) the foundations of power. But humor’s effect can go in the opposite direction as well, aiming at the exclusion of “others” (as in xenophobic and racist jokes), reinforcing existing power structures (as in misogynist humor), and strengthening dominant systems (as in Nazi or Communist propaganda humor).

This dual nature of humor was clear to me, but a review of the relevant literature revealed that commentators on the topic usually just picked one of the two sides: There are those who affirm the subversive, anarchic, counter-hegemonic effects of humor (think Mary Douglas, Barry Sanders, John Morreall, and Alison Dagnes). I belonged for a long time to this camp, seeing humor as a salutary, authority-defying, liberatory force. But another group of thinkers—and they seem to be in the ascendant at the moment—are concerned by the boundary-enforcing, exclusive, and divisive effects of humor (think David Feltmate, Giselinde Kuipers, Terry Lindvall, and the Christian theologians of laughter). As is often the case when a phenomenon is approached in binary fashion, there is truth on both sides. Therefore, in the absence of a working model that could capture humor’s divergent modalities, I felt the need to create one. Taking into account both the transgressive and the reactionary potentials of humor, I developed a four-factor humor model that reflects this multi-dimensional reality of humor. I define a liminal (boundary challenging) and an entrenching (boundary reinforcing) category of humor, while subdividing each of these modalities into a “soft” (good-natured, mild) and a “hard” (caustic, aggressive) type. (See Table 1.) 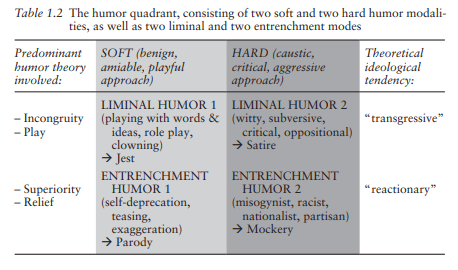 Crucially, this model is not meant to serve as a matrix for static pigeonholing of comical contents. On the contrary, the real value of it lies in its dynamic attribution of different humor modes to one and the same work, performance, or joke. Humor is not a stable, inert form of expression, but—more often than not—it flickers through multiple modes, even in one and the same joke, cartoon, or comedy performance. In other words, it is often impossible to say that this or that joke is purely good-natured (“soft”) or purely mean-spirited (“hard”), and neither is it often the case that a given piece of humor is only entrenching or purely liminal. Monty Python’s Life of Brian has harmless as well as deeply subversive jokes; it is mildly parodic as well as savagely subversive. On one page of The Mysterious Stranger, Mark Twain can be good-naturedly playful, portraying the follies to which the faithful are prone, and on the next he can bitterly ridicule religious doctrines. Rowan Atkinson’s mock sermon as a vicar can have implications that are liminal and entrenching, subverting some boundaries (of doctrine) while reinforcing other boundaries (by stereotyping the clergy). What this shows is that trying to isolate one semantic intention or one specific social or moral effect of a joke to ban or otherwise condemn the joke is often reductive and unhelpful.

But while this aspect of my research emphasizes the ambivalent, pluri-dimensional, multi-modal aspects of humor, there is another dimension to my work that yielded more tangible and concrete results. Indeed, taking a long historical view and applying a precise literary lens, I was able to pinpoint a fairly consistent long-term trajectory of Christian religious comedy. A careful analysis of the comical targets that were singled out by prominent literary authors over the past seven centuries reveals a clear-cut trend: Since Dante, writers have progressively targeted ever higher-order religious topics to laugh at. Starting with the funny antics of individual believers in the late Middle Ages (Dante, Boccaccio, Chaucer) to ridiculing lower clergy, monks, and even the pope during the sixteenth through eighteenth centuries (Chaucer, Erasmus, Voltaire) to mocking Church doctrines and Christian articles of faith from the eighteenth century onward (Voltaire, Twain, and Anatole France) to poking fun at scriptures and God in the twentieth century (Twain, France, Jaroslav Hasek) and to finally exposing to laughter the entire project of religion in the current era (Monty Python, James Morrow, David Javerbaum), humor’s expansion roughly tracks the progressive secularization of democratic societies in the Christian West since the Renaissance. While this is a correlation (with the direction of the causation uncertain), it is clear that the expansion of free speech, the rise of secular politics, the progression of rational science, and the general spread of enlightenment values has been accompanied by an ever more fearless, unfettered, irreverent, and bold comedy culture that left no religious dogma untouched and no god unmocked. (See Table 2.) 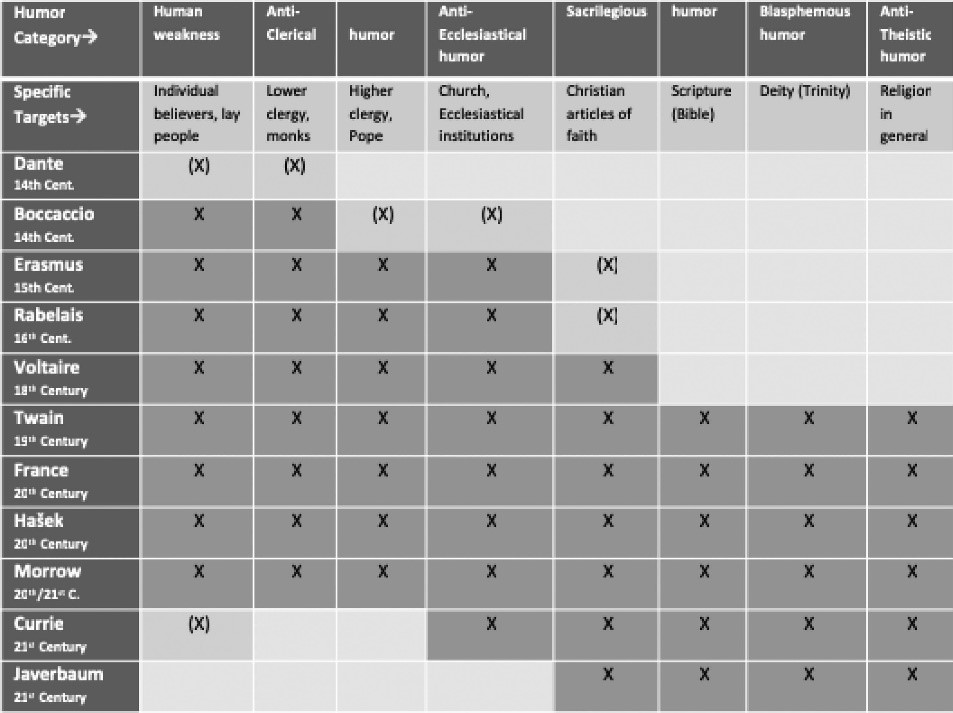 But it’s not only the case that comedy has eroded one bastion of sanctity after another across the span of time but also that today’s pop-culture comedy scene in the West almost mirrors this diachronic development in the synchronic context. (See Table 3.) 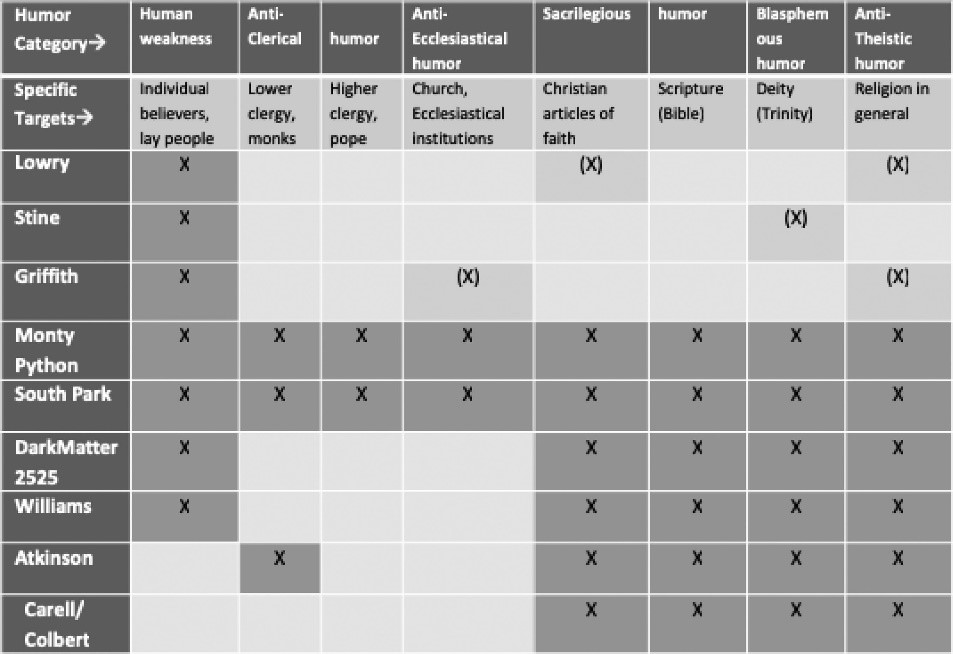 As Table 3 shows, we have Christian stand-up comedians today (think Mark Lowry, Brad Stine, Anthony Griffith) who are producing comedy in the fashion of Boccaccio; then, we have comedic outfits such as Monty Python and South Park that are following in the footsteps of Mark Twain by lampooning every conceivable subject of Christianity; and, finally, we have popular comedians such as the late Robin Williams and Rowan Atkinson, who aim their comical barbs mainly at the high-order, most-holy topics of religion. It’s not unreasonable to conclude that today’s extremely varied, diverse comical landscape is the result of the West’s progressive opening up to ever more subversive uses of comedy across a span of centuries.

That this trajectory is neither inevitable nor historically unavoidable can be demonstrated by reference to other religious traditions. Islam, for instance, has not seen a comparative liberalization of its humor culture within the same time span; in fact, the inverse rather seems to be the case (see, for example, Garton Ash or Tabash). Restrictive Islamic humor sensibilities as well as explicit scriptural regulations of laughter are so pronounced—especially in the most fundamentalist Islamic societies—that cracking jokes at high-order targets of religion is not only unpopular, it might constitute a capital offense. Clearly, compared to Christian lands, the range of comical targets related to religion (as well as, presumably, related to secular powers) that people in many Muslim societies can joke about is much narrower, and therefore the variety and boldness of the comical discourse is reduced.

Is this a loss? Only if one considers the widest possible spectrum of humorous expression an artistic, cultural, and social good. Clearly, Islamic rules that deem mockery, sarcasm, and even teasing to be an indication of moral failings (the 49th Qur’anic surah [Al-Hujurat], verse 11, as well as several Hadiths such as Abu Dawud, Book 43, 4972) have the force of moral idealism behind them. If cracking sarcastic jokes is a sign of moral failing, then the West certainly has a morality problem. Then again, to identify sarcasm with unclean mental habits may strike many as too narrowly moralistic; moreover, this attitude presumes that sarcasm is definitively diagnosable, that its meaning is absolutely clear and determined. The problem with such an “infallible” approach is that A) sarcasm’s ironic tone makes it inherently slippery, and B) humorous discourse in general eschews interpretive certainty. As my extensive social-science research has shown,2 what is offensive for one person is not offensive for another, even within the same specific population; for example, what one segment of people considers an anti-Semitic joke is considered by another group as a joke against anti-Semitism. Therefore, I argue that to rule certain jokes out-of-bounds, to designate which joke is offensive and which is not, and to punish humorists for crossing certain lines is to make a category mistake, fundamentally misunderstanding the nature of humor, which consists in confounding certainty and fostering ambiguity. Moreover, had there been an effective humor police in the past, we would not be able today to enjoy the great works of religious comedy such as The Birds, Praise of Folly, Gargantua and Pantagruel, Candide, and many more.

Bernard Schweizer is a professor of English at Long Island University (Brooklyn). He has authored several books, including Hating God: The Untold Story of Misotheism and edited collections like Reading Heresy: Religion and Dissent in Literature and Art. Schweizer is currently putting the finishing touches on a book about religion and humor titled The Way, The Truth, and the Laugh: Humor's Triumph in Christian Culture.

The Return of Ibn Warraq

Introduction: About those Other Apocalypses …

Why Climate Change Is an Irrelevance, Economic Growth Is a Myth, and Sustainability Is Forty Years Too Late

The Internet, the Virus, and Reason

Toward a More Democratic Atheism

The Keys to Irreverent Comedy

Is a Good God Logically Possible?

Miraculous Materialization of the Madonna? The Figure That Appeared in a Flash