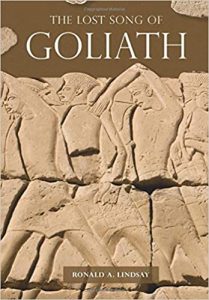 Ronald A. Lindsay, former president and CEO of the Center for Inquiry, whose nonfiction includes Future Bioethics: Overcoming Taboos, Myths, and Dogmas (Prometheus Books, 2008) and The Necessity of Secularism (Pitchstone, 2014), here offers his first novel. The Lost Song of Goliath retells the David and Goliath story from the Philistine perspective—specifically from the perspective of Goliath, a man of humble origins whose gigantism and fighting prowess gain him entrée to the throne rooms (and boudoirs) of royal power.

Lindsay’s prowess, it turns out, is as a historical novelist. In constructing a life and milieu for Goliath, he puts forward a generally credible and always affecting story of love, intrigue, violence, and disappointment—a treatise on politics, values, and technology in the Iron Age Middle East, a bittersweet love story, and always a page-turning thriller.

If it had occurred, the Hebrew conquest of the Holy Land as recounted in the Old Testament would have been a terrifying and infuriating experience for the peoples it overran—and, according to legend, typically annihilated. It’s a story that cries out to be told from the other side, and Lindsay quite capably limns what it might have been like for the Philistines to find themselves in the crosshairs of the Hebrews’ implacable—and, again according to legend, astoundingly successful—advance. A few critics have suggested absurdly that Lindsay engages in anti-Semitism when he has Philistine characters apply offensive slang such as Hebes to the Hebrews. Let’s be realistic: if the Yahweh-intoxicated hordes of the Book of Joshua were surging toward your homeland, wouldn’t you reach for denigrating slang while you still could?

The novel closes with Lindsay’s wildly imaginative account of what really happened when David met Goliath. (Spoiler: miracles had nothing to do with it.) This method contrasts with Lindsay’s tacit acceptance of the Old Testament conquest narrative, whose greatest virtue is that in fact nothing remotely resembling it ever occurred. But then, if one is going to write a historical novel about Goliath and David, one can scarcely begin by complaining that the scriptural conquest of the Holy Land is false history. The legendary conquest furnishes the setting on which the rest of the story depends.

If I have any criticism of this novel, it is that in the service of making Goliath more virtuous, Lindsay occasionally has him display frankly unrealistic reluctance to engage in violence or sex. At these (rare) moments, it seems that the author is projecting an idealized Christian morality onto Goliath—a surprising choice in that at most other times, Goliath is at home with brutal violence and displays great enthusiasm for a pagan culture that celebrates all the pleasures of the flesh.

All in all, The Lost Song of Goliath is a redoubtable first novel, a capably wrought historical thriller that serves up a rounded and often moving account of what life might have been like before the armies of Yahweh snuffed it out.

What Can Historic Sites Tell Us about the Movement for Women’s Suffrage in New York State?

God and Woman Suffrage: In the Beginning

Life Exceptionalism vs. the Chemical Machine

Republicans Are Hazardous to Your Health