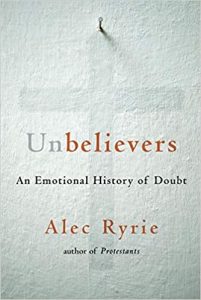 If, like me, you were educated in a parochial system of any stripe, you likely came away with the notion that the human race was from the get-go unremittingly religious: Originally adoring nature and earth and sun gods—or the odd golden calf—then switching to pharaohs and kings, moving on to super-humans of the Greco-Roman era who could fly and bi-locate, and finally to Islam and Christian variants right up to the explosion of atheism in our time.

Serviceable but simplistic, Professor Alec Ryrie, author of Unbelievers—an Emotional History of Doubt, might say. He is also professor of Christian history at Durham University and coeditor of the Journal of Ecclesiastical History. Upfront (in the intro), he contends that a closer look at history will “cast our current moment of pell-mell secularization in a different light.” His survey of the history of “Doubting Thomases” might also give readers of this publication a smug sense of validation. Or even wry amusement.

Ryrie begins with what is widely assumed to be Age of Faith—the Middle Ages—and the “rumor” of a book titled Of Three Imposters, which theorized that Moses, Muhammad, and Christ were all hoaxes, but the author could discover no solid evidence the text ever existed! Inherently scintillating, even scandalous, both the title and the notion of it gave this nonexistent volume a life of its own. Ryrie rechristens the Middle Ages the “Era of Suspicion” because the villains (the term atheist had not yet been coined) who jettisoned faith were thought of as men (rarely women) who did so to sin high, wide, and handsomely unhampered by conscience or compunction.

Hauled before the Italian court of Inquisition, Nicholas of Pasignano blasphemed, berated the liturgy, and swore he would rather be wealthy than holy. He generally reinforced the public view of nonbelievers as thorough-going reprobates, whom the church cleverly classified as “Epicureans,” that is, pleasure-seekers. First-rate PR: stories such as Nick’s reinforced both the power of the Catholic Church and the piety of its adherents. In short, the “one, holy, Catholic and apostolic church” needed a few doubters to keep the faithful on the straight and narrow.

One of the more startling contentions in Ryrie’s book is this: “Medieval and early modern medicine owed virtually nothing to Christianity” but drew from Jewish and Islamic physicians and healers. The very locus of the deathbed in the sickroom right there on the raw edge of mortality and eternity made physicians frontline doubters. Not surprising: praying (the Catholic remedy) away cancer, an aneurysm, or the plague was hardly ever successful! Clerics could gloss over other prayer failures; physicians at death beds had a rougher time of it. Therefore, doubting docs were accorded wider latitude, though Ryrie concedes early on that most of the populace was a tad anti-clerical—not fond of the holiness news and willing to shoot the religious messenger.

Dredging up the classics—Pliny, Lucretius, Cicero, Ovid, and the Greeks—inadvertently infused the public-intellectual air of the late Middle Ages with religious skepticism, while keeping the borrowers and discussers of their ideas out of Inquisition courts and clinks. If indicted, they could deflect suspicion by faulting Aristotle, Socrates, Aristophanes, or Sophocles and the like. Pascal and Michel de Montaigne both pulled this off with aplomb, but then, that was France!

While Ryrie’s thesis is pertinent, his prose, especially metaphoric devices, is a wide, sweet cut above the clunking, ponderous writing you often get from an academic. Describing the new place of religion at outset of the Reformation, he writes: “And so, religion was confined to quarters, like a once-formidable relative sent to a nursing home: spoken of with respect, paid a ritual visit occasionally, its debts honored, but not allowed out in public where it might cause distress or embarrassment … until it died a natural death.”

Readers such as myself who expect to be let inside personal, emotional stories on the basis of the book’s subtitle—an Emotional History of Doubt—should note there is little or none, but I am unsure if that is a criticism or a compliment. Sir Walter Raleigh, in addition to his other peccadilloes (such as an affair with one of the queen’s ladies-in-waiting) was accused of atheistic fraternizing with Elizabethan England’s other famous heretic-cum-heathen, Christopher Marlowe. One must wonder if this were not simply dalliance with dangerous ideas. It’s the same kind of PR gaming the glitterati engage in when people come out as gay, queer, or transgender these days that is designed to keep names and faces in public places. Intrigued by Raleigh and Marlowe, I felt a little cheated here, but Ryrie is on about his business: following history.

Likewise, readers of this publication may become exasperated with nattering over such exigencies as how many angels can cavort on the head of a pin or how Noah managed to cram two of every animal onto a 300-cubit-long boat, along with feed/fodder or how he kept them from seeing one another as food.

The doubt-cat had escaped the bag well before the Reformation, so “by the 17th century it was generally agreed that Europe was drowning under a rising tide of atheism,” and we have the world we recognize today: “an arms race between the competing religious parties … stymieing one another’s missionary efforts.” By the end of the Reformation and the era of William Shakespeare, public life encompassed a secularized ethical vision that could feasibly postulate an atheist with morals—thus setting the stage for Charles Darwin, whose scientific observations were a mortal blow to Genesis. In suing for independence, our own Thomas Paine pointed out the “unrelenting vindictiveness” of the bible, “a history of wickedness that has served to corrupt and brutalize mankind.” The bible could be—and was—criticized with impunity.

Finally, Ryrie surveys the paroxysms of belief and unbelief in this century: the rise of organizations such as The American Association for the Advancement of Atheism, which appeared in the late Roaring Twenties and had disappeared by 1937’ post-World War II 1950s religiosity; the current rise of the Nons and Nones that began in the 1980s; widespread nonobservance across the older societies of Europe—all of which seem to indicate that the human race will vacillate back and forth between belief and doubt in perpetuity. This depends, of course, on the prosperity, epidemic, war, or Adolf Hitler of the time. So, in the end, history leaves us with more questions than answers.

If Ryrie’s thesis is correct, and it is certainly convincing, how are we to understand the motivations of a believer or a doubter? Where do these impulses come from? Could economics or psychology tell us more than history about the motivations of the Nicholas of Pasignanos, Eupicureans, physicians, Pascals, Montaignes, Raleighs, Marlowes, and Paines? Could it be a question of economics? Are the confident, comfortable, and well-fed more likely to flip God the bird? Has Unbelievers simply described the obverse of Marx’s opiate?

So while it is a fascinating read, Unbelievers—an Emotional History of Doubt may generate more questions than answers, which may be the best thing that can be said about a book. It sends you scurrying off in all directions looking for other or better answers.

S. Keyron McDermott's memoir "Tough Talk out of School" will be published late in the year by Bancroft Press.


Unbelievers—an Emotional History of Doubt, by Alec Ryrie (Cambridge, MA: Belknap Press, an imprint of Harvard University Press, 2019, ISBN 978-0674241824). 272 pp. Hardcover, $27.95.   If, like me, you were educated in a parochial system of any stripe, you likely came away with the notion that the human race was from the get-go unremittingly …

Drinking from a Fire Hose: What Was Your Pivot Point?

The Potential Power of the Citizenry

Police Brutality and the Role of Profit in Black Incarceration

Maybe Some Real Good Will Come Out of COVID

Living Up to It