Just when you think every memento of Robert Green Ingersoll’s life has already been catalogued, something new takes you by surprise. Late in March I received a telephone call from Cathleen Robertson of Peoria, New York. Among the effects of a deceased relative, she had found a trove of old photos, among them a portrait dated 1876 and bearing the stamp of a Peoria photographer. H. H. Cole operated a studio at the corner of Jefferson and Hamilton Streets, on the ground floor. Penciled notations on front and back identified the subject as “Rob Ingersoll.” Searching the Web, she had found the Ingersoll Museum web site, and wondered whether we could help shed any light on the mysterious portrait. 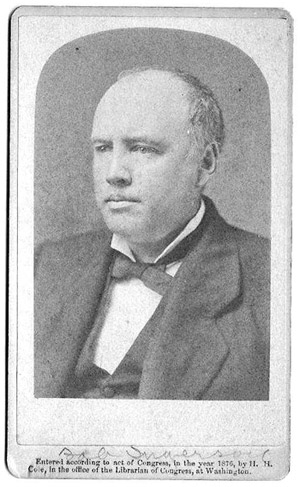 To my delight, the photo was a new image – as far as I know, one never before published in any Ingersoll biography or collection. It shows Ingersoll in three-quarter view, wearing a vest without lapels and a jacket with lapels of moderate size. It resembles a well-known Ingersoll portrait, also from 1876, that appears as the frontspiece in Volume 6 of most printings of the Dresden Edition of Ingersoll’s collected works. That photo is credited to the Photogravure and Color Company of New York, and differs from the Peoria image mostly because Ingersoll wore a vest with lapels and a jacket with very large lapels when photographed in New York. The Peoria photo also resembles an undated portrait issued by Ingersoll’s official publisher, C. P. Farrell, which shows Ingersoll, again in a lapeled vest and jacket, standing with one arm draped over an object covered by a blanket. Judging from Ingersoll’s hair, which has receded and turned markedly whiter, the standing photo was taken several years later than 1876. 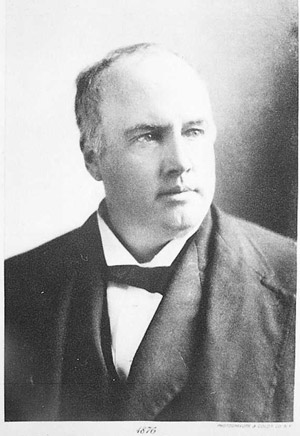 This well-known 1876 portrait appeared in Volume Six of the Dresden Edition (in printings with full frontspiece photos).

Ingersoll would have had plenty of opportunity to sit for a Peoria photographer. He made no less than six visits to Peoria, his former hometown, between November 1875 and the end of 1876. 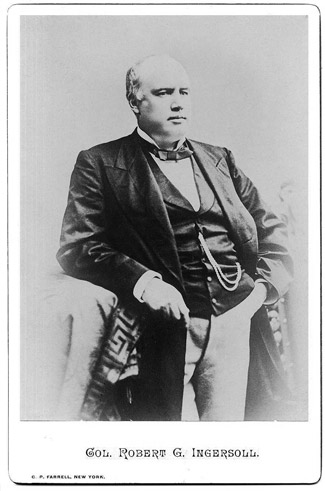 Ms. Robertson continues to explore the vintage photo collection, which apparently contains works of photographers from all around the country, not just in Peoria. Will additional images of Ingersoll – or portraits of other prominent nineteenth century freethinkers – be unearthed?

And Other Nuggets from Newspaper Archives

Doug Schiffer runs the Ingersoll Chronology Project, an online lifetime itinerary of Robert Green Ingersoll’s lecture engagements and appearances in the press. To use the Chronology visit http://www.funygroup.org/ingersoll.

One of the most productive areas of my research for the Chronology during the past couple of years has been searching online newspaper archives. These archives are collections of images of historical newspapers whose publication dates range from the late 1700s to today. A list of some of these archives is available on the website, under the Sources link. What makes these archives historical treasure troves is that OCR (optical character recognition) has been applied to the images. This converts the newspaper image to a text that a computer can search for matching keywords – in much the same way that Google searches web pages.

For the purposes of the Chronology, this makes tracking down little-known Ingersoll lectures vastly easier and faster. Simply searching for “Ingersoll” and “lecture” on one of these archives can quickly return dozens or hundreds of newspaper pages from the relevant time period.

Today these archives are still in their infancy. Only a small fraction of the newspapers of the period have been archived in this manner. As this fraction grows, the Ingersoll chronology will benefit immensely.

As an example of the sort of thing that online newspaper searches can reveal, it turns out that Ingersoll was a partner in building a hotel on Lake Ontario near Oswego, New York. I discovered this in the online archive “FultonHistory.com”. According to an article in the July 27, 1892, of the Mexico Independent, Ingersoll was a partner with Frank Earle of Mexico, New York in several business ventures. One of them was the “Twice Told Hotel.” As for the unusual name:

The name of the Hotel is “Twice Told” and Colonel Ingersoll did the christening.

“My little girl,” said Mr. Earle “is a great favorite of the Colonel’s. She wrote to him asking him to name the hotel, and he answered that since it was located in a chestnut grove he thought “Twice Told” the most appropriate name he could suggest, and we christened it that.”

Another newspaper article further explains that Ingersoll was making a literary reference to the book Twice Told Tales by Nathaniel Hawthorne.

Located on the shores of Lake Ontario, the hotel was very popular and did a brisk business during the summer months from 1892 until its destruction by fire in 1927. Later it was rebuilt and operated as an inn. Unfortunately, it no longer stands.

While there’s no evidence that Ingersoll was involved with the day-to-day operations of the hotel, the sources do indicate that he stayed there at least once. So far the exact date of the Colonel’s visit to the hotel has not been determined. The prospects are good, however, that a local newspaper would have made note of his visit, and it will eventually be discovered and added to the Chronology.

While this is clearly historical minutia, it does demonstrate the depth of details that online historical archives can provide. You can see the referenced newspaper articles on the Ingersoll Chronology webpage, under the “Mexico Hotel” link. 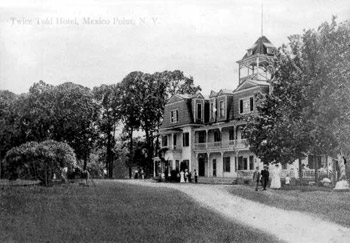 Finally, recent changes to the Freethinkers of Upstate NY web server, on which the Chronology resides, have made available essentially unlimited storage space. One use of this space will be to put all of Ingersoll’s microfilmed papers online. Sample images from reel 26 of the Library of Congress microfilm have been placed on the webpage, and can be browsed by clicking on the Ingersoll Papers link.

Twice-Told Tales established Nathaniel Hawthorne’s literary reputation when it was published in 1837. It was a two-volume anthology of short stories and essays that had been previously (and anonymously) published in magazines and annuals; the title refers to the fact that everything in the book has been published before. Hawthorne sent a copy to his former college classmate Henry Wasdworth Longfellow, who praised it in a review in the magazine North American Review. Hawthorne and Longfellow subsequently became close friends. Another influential review ofTwice-Told Tales was published in The Broadway Review; the reviewer was one Edgar Allan Poe.

“Sights from a Steeple,” an essay in Twice-Told Tales, contains a vivid description of the leafy canopy of a tree-lined street. “Ornamental trees—the broad-leafed horse-chestnut, the elm so lofty and bending, the graceful but infrequent willow, and others whereof I know not the names—grow thrivingly among brick and stone,” Hawthorne wrote. Perhaps it was this passage Ingersoll had in mind when the Mexico hotel’s location amid a chestnut grove prompted him to name the place Twice Told.

Roger Greeley, chairman of the Robert Green Ingersoll Memorial Committee, has created a new book for the Museum and also made a gift of a significant photograph. The book’s subject is obvious from its title: The Discovery, Restoration, and Donation of the Bust of Ingersoll to the Ingersoll Birthplace/Museum. In his classic anthology The Best of Ingersoll, Greeley told the story of the Dowagiac, Michigan theater, built in 1893, whose large sandstone bust of Ingersoll was presumed lost when the theater was razed in 1966. In 2000, Greeley received word that an elderly freethinker had recovered the Ingersoll bust, which had been damaged in the demolition but was still quite recognizable. Greeley persuaded the gentleman to give him the 550-pound carving, then arranged for it to be professionally restored, trucked to Dresden, New York, and installed in the Museum. Greeley dedicated the bust – now the dominant artifact in the Museum’s principal exhibit room – at an Ingersoll conference in the summer of 2001. 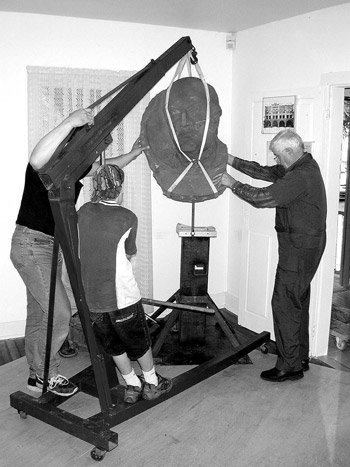 Spring 2001: That’s Roger Greeley on the right, helping to guide the 550-pound Medina sandstone bust of Ingersoll into position on its specially-built display stand. The bust was positioned at a location that structural analysis had identified as best able to bear the great weight.

It’s a fascinating story, and Roger tells it with his usual flair and enthusiasm. The book also include seven pages of photos, from a large image of the theater in Michigan to complete documentation of the bust’s reclamation and restoration. A copy of the book is available for review at the Museum, and copies are available for sale in the gift shop for $7.50. 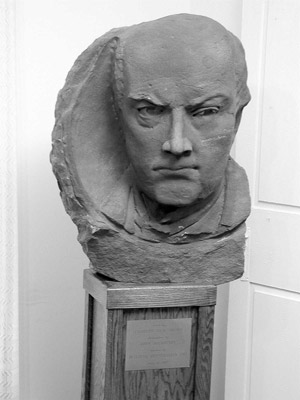 The Ingersoll bust as it can now be seen at the Birthplace Museum, Dresden, N.Y.

Greeley also gifted the museum a framed photograph showing himself in full costume and makeup as Ingersoll for his “two-man one-man show,” circa 1980. For many years Greeley and dresser Floyd Smith presented “An Evening with Ingersoll” before mostly Unitarian or freethinking audiences. Smith applied the bald skullcap and blended down its edges, and then portrayed a reporter asking “Royal Bob” a series of questions to which Greeley would reply, bringing many of Ingersoll’s best-loved passages to life. The Museum is honored to receive this photograph, which documents one of the principal ways Ingersoll’s memory has been kept alive. 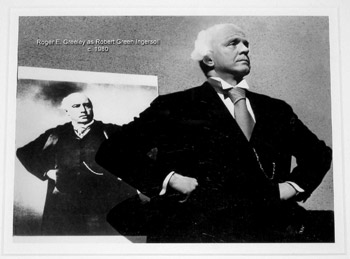 Roger E. Greeley in costume and makeup as Ingersoll, circa 1980