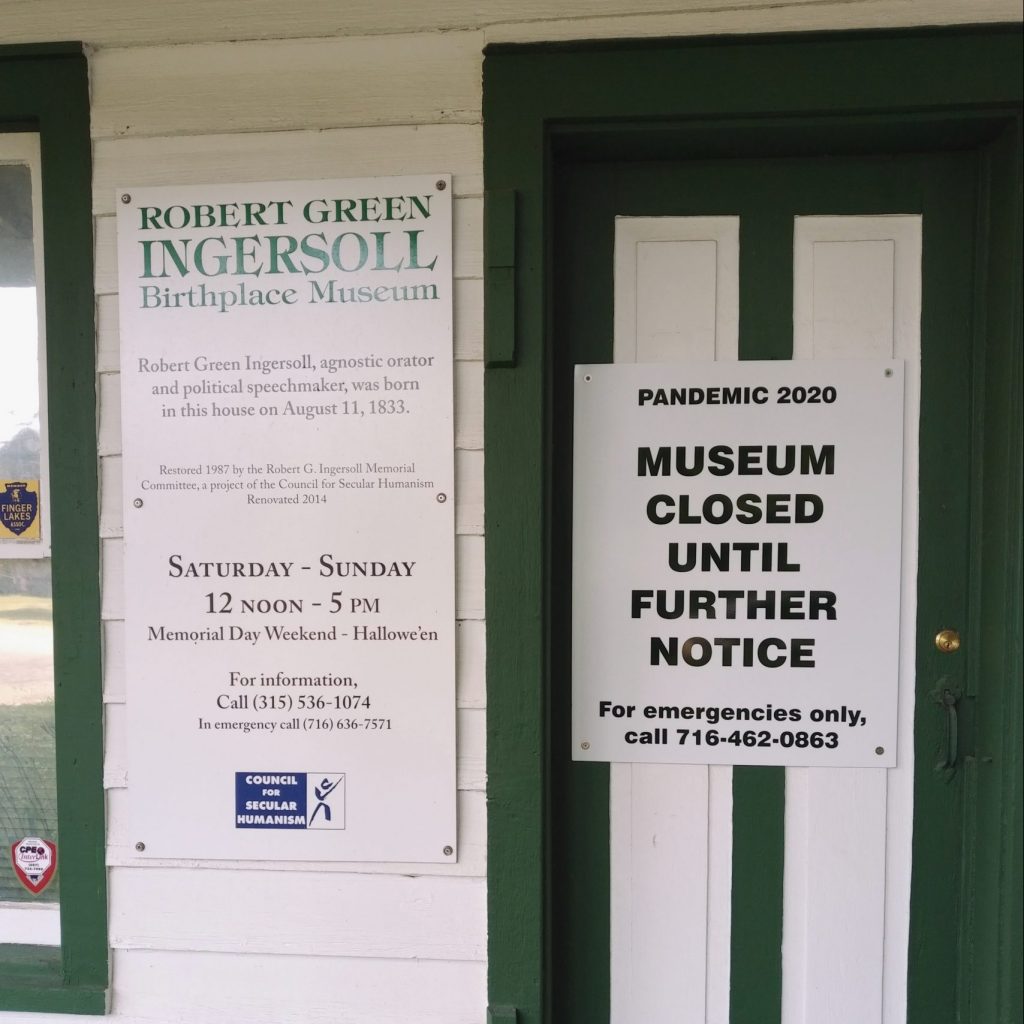 Due to pandemic the Ingersoll Museum will not open for the 2020 season, and will remain closed until further notice, depending on conditions.

“Packed with memorabilia that will fascinate anyone who cares about the history of radical dissent in America.”
— Susan Jacoby, The New York Times

“Takes visitors on a journey through one of America’s most transformative eras … Ingersoll the man comes to life.”
— Mike Hibbard, Finger Lakes Times

“You should be justifiably proud of the fantastic way that this museum keeps alive the legacy of this great and important man, who was so very much ahead of his time.”
— Alan Ross, Pennsylvania
(museum visitor)

The Robert Green Ingersoll Birthplace Museum showcases Ingersoll’s originality, his wit, his power as a persuader, and his role in history – in the Finger Lakes home where he was born.

Historical artifacts, displays, and a specially-produced high-definition video presentation bring Ingersoll and his times to life.

Historical artifacts, displays, and a specially-produced high-definition video presentation bring Ingersoll and his times to life.
On display are Ingersoll’s walking stick; his Masonic sword; a complete manuscript of his most famous speech, “Ghosts”; and a great variety of period artifacts. Explanatory signage tells the whole story of Ingersoll’s life, lavishly illustrated with photos, drawings, and period mementos.
A listening station invites visitors to hear three actual audio recordings of Ingersoll as recorded by Thomas Edison, as well as two renditions of a long-lost “Ingersolia” March. 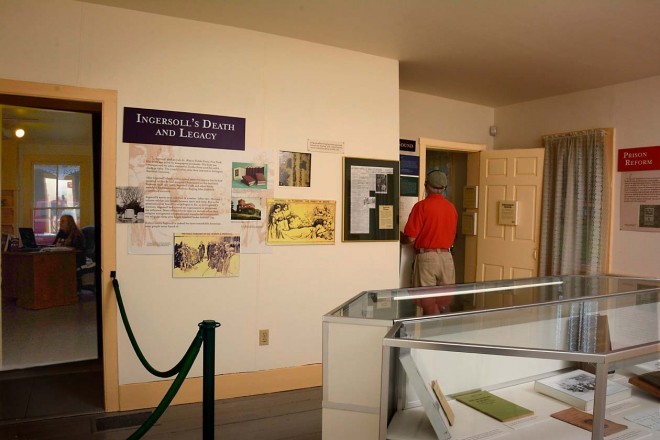 The interior was completely refurbished with professionally-designed displays in 2014.
The Museum’s second floor includes the room in which Ingersoll was born and a newly-opened display room. In addition the upstairs hallway features a variety of interpretive materials.
The upstairs room where Ingersoll was born has been restored with authentic period furniture.
A new upstairs display room has been opened to the public for the first time, with displays focusing on Ingersoll’s Civil War service, his years in Peoria, and his law career. A “Local History Room” displays artifacts from Dresden’s past. The Village of Dresden historian maintains an office in a private area of the house.

Explore a searchable database of Ingersoll’s life and speaking engagements.

Meet the Most Remarkable American Most People Never Heard Of

Who is Robert Green Ingersoll, and what’s to be seen at his birthplace museum? The answers are in the new 14½ minute introductory video… the very program viewed by visitors to the museum.Production of this video was funded by a grant from the James Hervey Johnson Charitable Educational Trust.

In a Hurry? This excerpt from the new video miniseries American Freethought gives an introduction to Ingersoll in just under 7 minutes! Watch now »